DO IT YOURSELF DIVORCE IN WYOMING

Doing your own divorce in Wyoming is very common, especially when your divorce is uncontested. An uncontested divorce is one in which you and your spouse both agree on all the issues related to dissolving your marriage.

Wyoming ranks in the top five for the highest divorce rates in the United States.

In Wyoming no-fault divorce is handed down on grounds of irreconcilable differences; no proof of fault is required. Fault divorce can be initiated when a spouse has been declared permanently insane by two doctors competent in psychiatry and has been confined in a mental institution for at least three years immediately preceding the Complaint for Divorce.

The plaintiff, the spouse initiating the divorce process, must reside in Wyoming for the 60 days immediately preceding the filing, or the marriage must have happened in Wyoming, with the plaintiff living there since.

The divorce may be filed in the district court of the county where either party resides.

The plaintiff selects and completes the appropriate forms. The primary form that requests the court for the divorce is the Complaint fro Divorce. 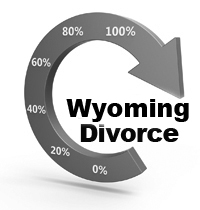 The plaintiff makes two copies of all the divorce documents and files them with the clerk of the court in the district courthouse in the county where either spouse resides.

The plaintiff assembles copies of all of the divorce papers, which means everything already filed, plus the Summons, and serves the defendant with the divorce papers as soon as possible after leaving the court.

Spouses disclose financial information to each other within 30 days of service. The disclosure identifies jointly held and individual assets and debts, safety deposit boxes, income and retirement data, and facts about employment and wages. Here is more information regarding the process of filing uncontested divorce papers in Wyoming.

The judge may want to hold a hearing to review the terms and conditions of the divorce and the settlement after the proper forms have been filed with the district court. Then the judge signs the Decree of Divorce and the divorce is final, which usually happens at least 20 days after service of process. Learn the best ways to save money when doing your own divorce in Wyoming.

Wyoming is an equitable distribution state, and it uses the all property ("kitchen sink") routine to divide property. When the spouses cannot agree, the court divides marital property according to what it deems to be fair. The appreciation of all property is marital.

Under Wyoming law, equitable is not the same as equal. Factors that determine equity include the respective merits of each spouse, the ensuing financial position of the respective spouse as a result of the divorce, and property ownership. When necessary, if it makes the total division more equitable, the court may also include the separate property of one or both spouses.

Judges enjoy discretion, and they consider the aftermath of the divorce, particularly "the conditions each spouse will face alone after the divorce, such as earning potential, medical needs, and childcare costs." In this, the court considers "the respective merits of the parties and the condition in which they will be left by the divorce"; and "the party through whom the property was acquired and the burdens imposed upon the property for the benefit of either party and children."

After the court classifies assets as marital or non-marital, it divide and distributes the marital property equitably and considers the contribution of each partner to accumulation of marital property; any dissipation of marital property, if any; both the market value and the sentimental value of the property to be divided; the value of each spouse's separate property; any tax or other economic consequences of the property division; the extent to which an award of property may eliminate the need for alimony; an each spouses overall need for financial security.

The judge, on a case-by-case basis, determines spousal support for the benefit of either spouse and awards alimony to either spouse after considering the partner's ability to pay.

The court does not consider marital fault in awarding spousal support.

The court may order real estate or profits from real estate paid to the other spouse as lifetime alimony. Before alimony has been established, the court may order either party to pay any amount of money to the other party. Courts may order temporary alimony, which is pendent elite; short-term alimony, granted to permit rehabilitation; and long-term alimony, which is reserved for lengthy marriages.

After alimony has been established, the court may, at any time, review the cases of either party and revise the amount. The main reason parties may ask the court to review the case is that the party paying alimony is experiencing an extreme increase or decrease in pay.

In Wyoming, alimony law makes it clear that the court can order either party to pay alimony at any time. While the court cannot make either party pay more than he or she is able to pay, it can substitute property for alimony. Alimony is paid for life in Wyoming, unless the court reviews the case and revises the amount.

Parties may discharge an order if they jointly disagree with the court. This means they may make their own decision with regard to alimony, rather than let the court make a decision, if they can agree on an amount. The court may order either party to appear in court at any time. It also may order monetary security (in any sum the court wishes) from the party paying alimony, before he or she pays alimony, to be sure money will be paid.

If the parties cannot agree on issues regarding the custody of minor children, the court determines custody according to the best interests of the child. It may not make custody decisions based solely on gender.

Determination of the best interests of the child is at the discretion of the court. Considerations include the child's respective relationship with each parent, the ability of each parent to provide adequate custodial care, the competency of each parent, geographic distance between the two parents, and the willingness of each parent to respect the other parent's rights and responsibilities, including rights of privacy, and "any other factors the court deems necessary and relevant."

At the judge's discretion courts have the right to require divorcing parents with minor children to complete a parenting class before granting a divorce.

The Wyoming courts have full discretion when determining visitation between children and parents. The courts can establish visitation, even if both parents agreed upon a no-visitation policy.

Sometimes, someone other than a child's biological parents, for example, grandparents, gains custody of a child. The Wyoming's code recognizes the visitation rights of grandparents, with some limits.

If the parents cannot agree on child support, the court turns to the state's Income Shares Model.

The Income Shares Model estimates the amount of support that would have been available if the marriage had not failed. This estimated amount is then divided proportionally to the parents according to each parent's income. This is easy to do using the Wyoming child support worksheet. Pay records typically substantiate the estimated incomes.

The judge deviates from the established model in order to consider special needs of the child, the ability of each parent to provide medical insurance coverage, and whether either parent has responsibilities for the support of other children. The court can also impose more subjective criteria such as the value of the services provided by each parent, the amount of time the child spends with each parent, and the potential earning capacity of each parent regardless of their employment status.

The Child Support Guidelines are presumed to be correct unless there is a showing that the amount would be unjust or inappropriate under the particular circumstances in a case.

Wyoming Service of Process for Obtaining a Divorce

The summons and complaint are served together. The plaintiff shall furnish the person making service with such copies as are necessary. The plaintiff directs the clerk in the manner of service of the divorce papers.

At the request of the plaintiff, the clerk delivers the divorce papers to the sheriff for service, or make service by either certified mail or by first class mail , or forward a copy of the summons and complaint to the Secretary of State, as statutory attorney-in-fact, for service as specified by any applicable statute.