Washington is one of 17 states and the District of Columbia that permit only no-fault divorce. The actual process can require the completion of as many as 20 forms. The divorce papers must be delivered, certified, and filed in an approved manner to be accepted by the courts to finalize a dissolution of marriage (divorce).

Washington is a community property state, and alimony may be awarded.

3 Step Divorce has provided a helpful guide of information for a dissolution of marriage in Washington. Learn more about the residency requirements, service of process, child custody and more.

Grounds for Divorce in Washington

If one spouse joins the divorce petition or does not deny that the marriage has faltered the court enters a judgment of irretrievable breakdown; however, if one party denies that the marriage is irretrievably broken, the court considers all relevant factors, including the circumstances that gave rise to the action as well as the prospects for reconciliation.

To file for divorce in WA, a party must be a resident, or a member of the armed services stationed in Washington or married to a resident of a person who is in the armed forces stationed in Washington. All you have to do is establish residency. A specific length of time is not required. A 90-day waiting period between the filing and service of process must transpire before the court acts on divorce petitions.

The action begins with the filing of a Petition for Dissolution of Marriage as well as a Summons, a Confidential Information Form and a Vital Statistic Form. The petitioner typically files in his or her home county or the county where the respondent lives. (Lincoln County permits nonresidents to file when both sides consent.) 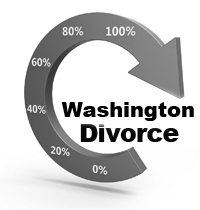 After the papers are filed, the petitioner serves copies on the respondent via a professional process server or the county sheriff. When the respondent voluntarily joins the action, service is omitted when he or she files a Joinder to the Petition. The 90-day cooling off period gives both sides a chance to reconsider or settle the issues. Here is more information regarding the process of filing uncontested divorce papers in Washington.

Between the filing and the resolution of all issue, both parties must make a complete disclosure of all assets and liabilities with Financial Affidavits.

If the couple agrees on the terms and conditions of the divorce - the division of assets and liabilities and child issues - they can file for an uncontested divorce, which usually does not require a court appearance. Ninety days after filing a Washington court can hand down a divorce. On the other hand, a contested action can be "a lengthy, expensive and enervating ordeal." Learn the best ways to save money when doing your own divorce in Washington.

Do It Yourself Online Divorce in Washington

Our online divorce makes it easy to file your own divorce in the state of Washington. In as little as 20 minutes you can have all your completed divorce forms and filing instructions ready for signing and filing. Instantly access your completed divorce forms after a short online interview. It is that easy, no lengthy completion or delivery times. See if you qualify below:

Washington is a community property state, which divides all property and debt acquired from the date of marriage until the marital cut-off date.

The courts accept any fair and reasonable division the spouses reach. The appreciation of separate property is separate. Except for an inheritance, gift or property owned before the marriage, all property acquired during the marriage is community. Under exceptional circumstances, the court awards the separate property from one spouse to the other spouse.

In dividing property, the court generally does not consider marital misconduct, but economic misconduct - such as gambling away community assets, for example - may result in off setting compensation to the victim spouse.

Retirement benefits are community property when the worker meets all the requirements for payout. This is called vested. They are either Defined Contribution Plans (DC), such as a 401(k), or Defined Benefit Plans (DB), which is the company pension. That part of a pension accumulated during a marriage is community property and subject to distribution. When spouses share in each other's pension plan, a Qualified Domestic Relations Order (QDRO) must be prepared. The QDRO spells out the terms and conditions of the pension distribution.

The court grants alimony to either spouse for a duration and in an amount that it considers fair based on all relevant factors, including the length of the marriage and the financial situation of the parties.

Marital fault is not a consideration in determining spousal support or alimony. Generally the spouse who has forgone an education or career to support children is eligible, and courts generally order temporary, short- or long-term depending on the needs of the recipient.

In considering alimony, the courts consider rehabilitation, standard of living, length of the marriage, the age and health of the parties and the "ability of the spouse from whom maintenance is sought to meet his or her needs while meeting those of the spouse seeking maintenance."

In Washington, the best interest of the child is the primary concern in child custody and that can mean joint or sole custody.

Courts permit a variety of custody regimes, but evaluate 10 considerations to determine whether joint custody is workable. One or both parents may be given either legal or physical custody, but when both parents can work together, the Washington court normally awards both parents shared custody.

Washington expresses a preference for both parents to share the custody of a child. Joint custody gives both parents equal right and responsibilities.

Washington uses the Income Shares model to determine child support. In this routine, a child receives the same proportion of parental income that he or she would have been received if the parents had not divorced because in an intact household, both parents pool their income and spent it for the benefit of all household members, including any children. Income Shares, which is based on a principal in the Uniform Marriage and Divorce Act, considers the gross income of both parents and then establishes the proportion each contributes and divides it among their minor children.

Sometimes, after calculating support, courts permit adjustments up or down that are called deviation factors. Courts may consider extraordinary expenses, independent income, seasonal fluctuation in parents' income, special needs as well "any other reason that should be considered to make child support more equitable."

A parent may be ordered to include a child on medical insurance, particularly when the noncustodial parent receives health insurance.

Washington Service of Process for Divorce

In Washington, process is a summons and a copy of the Petition.

A party is considered personally served when he or she receives the summons personally. Leaving a copy of the divorce papers at the defendant's home with a mature person may also effect Service.