Grounds in Vermont are: no-fault, when a married person lives "apart from his or her spouse for six consecutive months and the court finds that the resumption of marital relations is not reasonably probable," and fault grounds include adultery; incarceration for three years or more to life; intolerable severity in either part; desertion or when either party has been absent for seven years; gross neglect, and incurable insanity of either party.

Either spouse may file for divorce when the party has resided within the state for six months or more, but a divorce shall not be decreed unless either the plaintiff or the defendant resides in the state one year preceding the final hearing. Temporary absence because of illness, employment outside the state, military service, or "other legitimate and bona fide cause," does not affect the six months' period or the one-year period.

The divorce papers include a Cover Sheet, a Summons, Complaint for Divorce, and Notice of Appearance, a Confidential Sheet, and a Health Department Vermont Record of Divorce or Annulment. The first three can be filed separately. 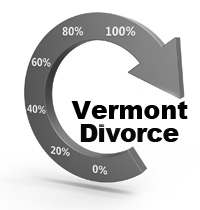 A combined Summons, Complaint, and Notice of Appearance form come in two forms: one with children and one without. Divorcing parents with minor children use a slightly longer form and provide information about the children. Spouses in agreement on all points can speed up the hearing process by filing, in addition to the above papers, an Affidavit of Income and Assets, Final Divorce Stipulation, an Agreement on Parental Rights and Responsibilities, Parent Child Contact, and Provisions Relating to Children (for minor children), and a Proposed Final Order. Here is more information regarding the process of filing uncontested divorce papers in Vermont.

The plaintiff files the divorce papers in his or her home county or in the county where the defendant resides and pays a filing fee. When the divorce is uncontested the filing fee is less. Depending on the county of residence, additional forms may be required.

The filing spouse serves the divorce papers on the opposing spouse in one of several acceptable service routines permitted under Vermont law.

Both parties exchange financial information, which can done by filing an Affidavit of Income and Assets along with the initial paperwork.

A contested divorce, which takes longer and costs more than an uncontested action, moves through the courts as any other civil action suit. Learn the best ways to save money when doing your own divorce in Vermont.

Do It Yourself Online Divorce in Vermont

Our online divorce makes it easy to file your own divorce in the state of Vermont. In as little as 20 minutes you can have all your completed divorce forms and filing instructions ready for signing and filing. Instantly access your completed divorce forms after a short online interview. It is that easy, no lengthy completion or delivery times. See if you qualify below:

The court assumes that marital property is split equally between the spouses. From there, the court considers factors that shift the balance from one spouse to the other. Ultimately, however, the division must be a fair division that reflects the past efforts and future needs of both spouses.

In making a property settlement, the court considers all relevant factors, including but not limited to: the length of the marriage, the age and health of the parties, the occupation, source and amount of income of each of the parties, vocational skills and employability, the contribution by one spouse to the education, training, or increased earning power of the other, the value of all property interests, liabilities, and needs of each party, whether the property settlement is in lieu of or in addition to maintenance, the opportunity of each for future acquisition of capital assets and income, the desirability of awarding the family home or the right to live there for reasonable periods to the spouse having custody of the children, the party through whom the property was acquired, the contribution of each spouse in the acquisition, preservation, and depreciation or appreciation in value of the respective estates, including the non-monetary contribution of a spouse as a homemaker, and the respective merits of the parties.

The court may include the retirement benefits and plans earned by both spouses as marital assets available for division. Retirement plans are either Defined Contribution Plans (DC), such as a 401(k), or Defined Benefit Plans (DB), which is the company pension. That part of a pension accumulated during a marriage is marital property and subject to distribution. When spouses share in each other's pension plan, a Qualified Domestic Relations Order (QDRO) must be prepared. The QDRO spells out the terms and conditions of the pension distribution.

The court grants alimony when the spouse seeking it lacks sufficient income, property, or both, including property awarded in the divorce settlement, to provide for reasonable needs, and is unable to be self-supporting through appropriate employment at the standard of living established during the marriage, or is the custodian of a child of the marriage.

The maintenance order shall be in such amounts and for such periods of time as the court deems just. The court considers all relevant factors including, but not limited to: the financial resources of the party seeking maintenance, the property apportioned to the party, the party's ability to meet his or her needs independently, and the extent to which a provision for support of a child living with the party contains a sum for that party as custodian, the time and expense necessary to acquire sufficient education or training to enable the party seeking maintenance to find appropriate employment, the standard of living established during the marriage; the duration of the marriage, the age and the physical and emotional condition of each spouse, the ability of the spouse from whom maintenance is sought to meet his or her reasonable needs while meeting those of the spouse seeking maintenance, and inflation with relation to the cost of living.

In awarding custody, the best interests of the child control the court's decision. The court may divide custody between the parents on such terms and conditions as serve the best interests of the child, or award parental rights and responsibilities primarily or solely to one parent when the parents cannot agree to divide or share parental rights and responsibilities.

In a joint custody agreement, the parents must include information such as the child's living arrangement, educational details, travel arrangement, and communication in their parenting plan.

In awarding custody, the court considers a variety of factors including the ability of each parent to provide the child with love, affection and guidance.

The court is indifferent to the gender of both the child and the parent.

In the Income Shares model, a child receives the same proportion of parental income that he or she would have been received if the parents had not divorced because in an intact household, both parents pool their income and spend it for the benefit of all household members, including any children. Income Share considers the gross income of both parents and then establishes the proportion each contributes and divides it among their minor children.

The total support obligation shall be presumed to be the amount of child support needed.

The court may order support to be continued until the child attains the age of majority or terminates secondary education; whichever is later.

Vermont Service of Process for Divorce

Vermont permits several acceptable service routines. The defendant who consents to the divorce can sign an Acceptance of Service form, which is then filed with the court. In this routine, the plaintiff can personally hand-deliver the paperwork to the defendant.

The plaintiff can also serve the forms via certified mail, first class mail, or sheriff's service. Service by first class mail requires an Acknowledgement, which is filed with the court after the defendant signs it.

In the case of a missing spouse, service by publication requires the plaintiff to place the advertisement in a newspaper that circulates in the spouse's last-known community. The advertisement must appear in the newspaper for three consecutive weeks.