DO IT YOURSELF ONLINE DIVORCE IN UTAH

Getting your divorce done on your own in Utah is pretty common as long as both parties agree with each other. Doing your own divorce allows you to save time and money and also puts you in control. The proper divorce papers must be filed with the county court and the uncontested divorce process in Utah is quickest and easiest when both spouses sign the filed paperwork.

Utah grants a no-fault divorce when the spouses have irreconcilable differences. Fault divorces may be granted in Utah based on the following grounds: impotency of the other spouse when the marriage began; adultery committed by the other spouse; willful desertion for more than one year, willful neglect to provide the family with the necessities of life; habitual drunkenness, a felony conviction, physical or emotional abuse, incurable insanity, and legal separation for at least three years.

Residency Rules for Divorce in Utah

The petitioner completes the Cover Sheet for Civil Actions, Department of Health Form, Verified Petition for Divorce, Summons, and if there are minor children, a Parenting Plan and then files the originals in the county court in which one or the other spouse resides, and the divorce paperwork is served on the respondent by the petitioner. 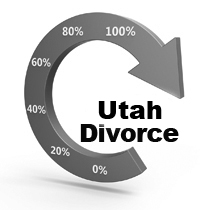 Under Utah law, the petitioner has 120 days from the date of filing to serve copies on the opposing side. Utah permits various forms of service, including hiring a private process server, delivering the papers in person, and sheriff's service. Here is more information regarding the process of filing uncontested divorce papers in Utah.

The spouses exchange financial information, including a list of all assets and debts. Both spouses must file a Financial Declaration after the respondent submits his or her response to the original divorce Petition.

The divorce can become final 90 days from the date of filing; however, no hearing for a Decree of Divorce is normally held by the court until 90 days pass from the filing of the Petition. Learn the best ways to save money when doing your own divorce in Utah.

Do It Yourself Online Divorce in Utah

The court divides the marital estate, assets and liabilities equitably, but this does not necessarily mean an equally. In Utah in dividing property, judges enjoy discretion to consider factors unique to each marriage rather than rely on a hard and fast set of rules for property division. Despite the court's relative freedom to decide what is fair, courts consider the length of the marriage and how the spouses acquired the marital property. Judges look at conditions each spouse faces alone after the divorce, such as medical needs and childcare costs. Each spouse's level of education and earning potential are also relevant. Judges may divide property unequally after considering these and other factors.

Property is either marital or separate, and it includes assets and liabilities. All of the marital property must be divided between the spouses when the marriage ends, and marital debts must be assigned.

The spouse who owns separate property keeps that property; it can't be awarded to the other spouse.

The court may include the retirement benefits and plans earned by both spouses as marital assets available for division. When both spouses have retirement or pension plan benefits, each will be awarded their own benefits. Utah courts recognize that it is best for the spouse who contributes to the retirement or pension plan to receive all of the benefits and for the other spouse to receive something of equal value, such as equity from the home or cash or other property. If there is nothing of equal value to give to the other spouse, then the retirement benefits may have to be split.

Retirement plans are either Defined Contribution Plans (DC), such as a 401(k), or Defined Benefit Plans (DB), which is the company pension. That part of a pension accumulated during a marriage is community property and subject to distribution. When spouses share in each other's pension plan, a Qualified Domestic Relations Order (QDRO) must be prepared. The QDRO spells out the terms and conditions of the pension distribution.

The court can require that either spouse pay alimony, and the longer the marriage, the more likely the court will award alimony.

Utah courts determine alimony on a case-by-case basis based on the financial situation of each spouse. The courts generally compare the earning capacities.

In addition to marital misconduct of the parties - fault - in determining alimony, the court considers a number of factors in deciding alimony including the financial condition and needs of each spouse, the earning capacity of each spouse, the ability of the spouse to pay spousal support, the duration of the marriage, which spouse has custody of the children, the previous financial contributions of the spouse receiving alimony, and any misconduct or fault of either spouse.

The court decides child custody by determining the best interests of the child. Utah courts prefer to award divorced parents joint custody of their child. The courts must determine whether a joint regime meets the child's emotional and physical needs. Both parents must demonstrate that they can make the child's well being their top priority, and that they will work together to make decisions that serve the child's best interest. It is also likely that joint child custody will be awarded in Utah if both parents were actively involved in raising the child before the divorce. The court can ask a child whom she or he wants to live with and can consider the child's wishes regarding custody or visitation, but these wishes do not control the court's decision regarding custody and visitation.

In deciding for joint custody, in addition to considering the child's wishes, if the child is of an age to express a reasonable preference (generally age 12 or older); the court considers the geographical proximity between the parents; each parent's ability to place the needs of the child first in reaching appropriate decisions; the involvement of both parents in the child's upbringing, evidence of child abuse; each parent's maturity and ability to avoid conflict for the sake of the child; the parents' ability to cooperate with one another; and "any other factors deemed relevant by the court."

Each parent must attend a course on the effects of divorce on children and prove completion to the court.

Either or both spouses may be ordered to pay child support. The support order stipulates which parent pays for the child's health insurance and education. In Utah the parties file a financial affidavit detailing all income, assets, expenses, and debts, including child support obligations for other children from other relationships.

Utah child support guidelines state the amount of financial support presumed necessary to support the children, but the court may deviate when the guidelines are inappropriate.

In Utah child support guidelines are statutory. They are based on the Income Shares Model and are based on gross income of the parents.

In the Income Shares routine, a child receives the same proportion of parental income that he or she would have been received if the parents had not divorced because in an intact household, both parents pool their income and spend it for the benefit of all household members, including any children. Income Share considers the gross income of both parents and then establishes the proportion each contributes and divides it among their minor children.

In Utah, as in every other state, the petitioner serves the respondent with copies of all the divorce documents. This is the service of process; it is important because it enables the respond to file a counterclaim. Under Utah law, the petitioner has 120 days from the date of filing to serve copies on the opposing side. Utah permits various forms of service, including hiring a private process server, delivering the papers in person, and sheriff's service.

Utah law allows the filing spouse to file by mail but recommends using registered mail to guarantee receipt of delivery. The petitioner can also hand-deliver the divorce papers to the county clerk.