DO IT YOURSELF DIVORCE IN TEXAS

The actual Texas divorce process can require the completion of as many as more than 20 forms. The divorce papers must be delivered and certified in an approved manner and will vary depending on the type of divorce.

Most people who file their own divorce, file what is called an uncontested divorce where both spouses agree on all the issues and want the marriage over as soon as possible.

If it is not an amicable, uncontested divorce in Texas, a divorcing spouse can request a jury trial, but Texas requires that divorcing couples try mediation before going to trial. Spouses can request a jury trial, but generally a judge decides the trial. In Texas, a jury does not make decisions on property division in a divorce, but Texas juries do decide child custody, visitation, parent's rights and paternity issues.

The court may issue temporary orders to deal with immediate problems, such as child custody and financial support, before the divorce is final. Temporary orders may deal with the spouse who occupies the family house, who will be able to write checks on the bank accounts, and who has custody of the children. In most cases, depending on the court, the spouses will be ordered to mediation prior to any hearing on temporary orders.

Grounds for divorce include irreconcilable differences and being unable to re-unite "because of discord or conflict of personalities that destroys the legitimate ends of the marital relationship and prevents any reasonable expectation of reconciliation" as well as adultery, abandonment, commitment to a mental health facility for three years, a felony conviction and imprisonment for at least one year, cruel and inhuman treatment, or living separately for at least three years.

Either spouse may file when at least one of the spouses meets the residency requirement of living in Texas for at least six months before filing. 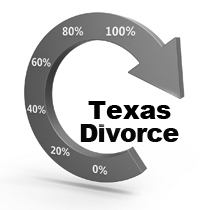 In a contested or uncontested divorce in Texas, the petitioner files an Original Petition for Divorce with the District Clerk of the county in which one or both of the spouses reside, and then has the papers personally served on the respondent. The Petition contains information regarding marital property, children of the marriage, and the grounds for divorce.

After the respondent has been served, the parties provide information about their finances.

In an uncontested divorce, both spouses agree about all the terms of the divorce, such as division of property, child custody and support payments, and the case moves through the courts administratively. Here is more information regarding the process of filing uncontested divorce papers in Texas.

In a contested action, however, the petitioner can request that the court issue a standard Temporary Restraining Order that preserves the assets of the marriage, and requires that the spouses behave properly. When no Temporary Restraining Order is issued, the respondent has 20 days plus the next following Monday to file a document called an Answer. The spouses can then undertake discovery, and the action moves through the court system. Learn the best ways to save money when doing your own divorce in Texas.

Do It Yourself Online Divorce in Texas

However, property owned by either spouse before the marriage is separate property. In a case involving children, the Texas divorce court often divides the property unequally.

Texas divorce laws do not require an equal division of the community property.

Courts generally limit alimony to three years because maintenance is supposed to be temporary, and alimony is only awarded when a spouse married for at least 10 years cannot support herself or himself, or when a spouse is convicted of domestic violence during the divorce case.

Texas law assumes that awarding joint custody is in the best interests of the child. The court defines the rights and obligations of each parent. Living arrangements are often designated to the person that has been the primary caretaker of the child.

- Texas child support laws use the Percentage of Income Formula to calculate how much support the noncustodial parent must pay. This formula applies a percentage to the income of the non-custodial parent based on the number of children that need support.

Delivering the Petition to the respondent can be accomplished by law enforcement, a private process server, or having the other spouse sign a Wavier of Service.

The petitioner can also obtain a Waiver of Citation form from the clerk. The petitioner mails this form, along with the Petition, to the other spouse, who signs the waiver to show the court that he or she waives the right to be served the Petition.