DO IT YOURSELF DIVORCE IN SOUTH DAKOTA

Grounds for Divorce in South Dakota

The lawful ground is one the parties can substantiate, or one the filing spouse desires to prove to the court.

The court may order a divorce based on: irreconcilable differences, which is no-fault, or on fault grounds that include adultery, extreme cruelty, willful desertion, willful neglect, alcohol abuse and conviction of felony.

Residency Requirements to File for Divorce in South Dakota

The plaintiff must reside in South Dakota, or be stationed in this state while in the military, and that residence or military presence must be maintained until the decree is entered. The divorce may be filed in the county in which either spouse resides. The defendant has a legal right to have the case transferred to his or her county. There is also a 60-day waiting period that must elapse after the date of filing before the divorce will be granted.

In order to file for divorce pro se in South Dakota, a party must complete the appropriate form depending on his or her situation - plaintiff, the spouse who initiates the divorce, or the defendant, the spouse who receives the papers and responds to the Complaint. 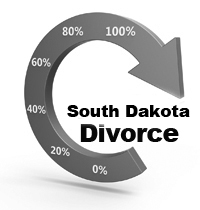 The plaintiff makes three copies of all documents and keeps the original. Eventually one copy goes to the court, one to the defendant, and the plaintiff gets one set.

The plaintiff files the divorce papers with the clerk in the local courthouse. The plaintiff pays a fee unless he or she completes an Affidavit of Indigency (UJS 305) and the court agrees that the fee should be waived because he or she can't afford it.

The plaintiff serves the defendant as soon as possible after filing.

The defendant must file an Answer within 20 days of being served, or the plaintiff can ask for a default judgment, which means that the court grants the divorce solely on plaintiff's terms and without input from the defendant.

Spouses may separate, and agree to in writing, any provisions for child support, spousal support, and property division, on the same grounds as are required for the divorce. Here is more information regarding the process of filing uncontested divorce papers in South Dakota.

Both spouses complete a notarized Financial Affidavit (UJS 304), which details each spouse's financial picture, both assets and liabilities and income and expenses.

A mandatory 60-day waiting period from the on set of the divorce until the court has jurisdiction to grant a divorce must be observed. Learn the best ways to save money when doing your own divorce in South Dakota.

Do It Yourself Online Divorce in South Dakota

Our online divorce makes it easy to file your own divorce in the state of South Dakota. In as little as 20 minutes you can have all your completed divorce forms and filing instructions ready for signing and filing. Instantly access your completed divorce forms after a short online interview. It is that easy, no lengthy completion or delivery times. See if you qualify below:

South Dakota is an equitable distribution state, and all property is subject to distribution. Marital assets are distributed in an equitable fashion, regardless of who holds the title and unless agreed otherwise by the spouses.

All marital property will be divided in an equitable fashion according to the court. The appreciation of all property is marital. In South Dakota, it does not matter whether title to property is in the husband's name, the wife's name, or both. Regardless of title, the court can divide property or even give it to the other spouse if that's equitable.

When the parties are unable to reach a settlement, the Circuit Court distributes the marital assets between the two parties in an equitable fashion. Equitable does not mean equal, or even half, but rather what is deemed by the Circuit Court to be fair.

Fault is not a factor unless it is relevant to the acquisition of the property during the marriage.

As in other jurisdictions, divorcing couples normally sell the marital home and divide the profits, or sell the home to one party and refinance, or the custodial parent occupies the house until the last child leaves school and then sell it, which is a routine often considered by South Dakota courts.

Either spouse may be ordered to pay alimony to the other party for a period of time as the court deems just, particularly when the award makes a divorce more equitable. The court looks at all the circumstances and decides on a case-by-case basis.

The court determines whether to award alimony, the amount, and duration based on the interests of justice and the situation of the parties. A spouse may seek alimony if he or she lacks the assets and income to be self-supporting. The court awards alimony on a temporary or permanent basis based on the owing spouse's ability to pay, the spouses' ages, the duration of the marriage, and the requesting spouse's ability to work.

South Dakota also considers the degree of marital fault by the recipient. The court also considers other factors, including the duration of the marriage and the parties' needs.

A change of circumstances in either one party's ability to pay, or a recipient's need, may be justification for modification of alimony. The party who seeks a modification must petition the court and provide evidence that the modification is in the interests of justice.

Alimony lasts as long the court determines it to be just. A support agreement generally states the specific term for an award. Modification and termination may be available no matter what the term states in the agreement.

Courts may order temporary, granted during the divorce proceedings and before the final decree; short-term, granted to allow the recipient time to gain necessary skills; long-term, or permanent, granted to a spouse who has significant needs, and is usually reserved for lengthy marriages

The determination of child custody is based on the best interests of the child. If the child is old enough to form an intelligent preference, the court may consider it in determining custody. There is no preference towards either gender in determining custody. Unless it relates to the fitness as a parent, such as domestic abuse, or assault, or a conviction, excluding vehicular homicide, of a parent for the death of the other parent, fault is not considered relevant.

In addition to investigating domestic violence, child abuse, negligence, or substance abuse, in custody disputes, the court considers the child's preferences as to custody, provided that he or she is mature enough to make such claims, which is usually when the child is 12 years old; his or her medical, dental, education, and other needs; his or her moral and mental well-being and physical residence; the parents' preferences as to custody; their parent's parenting plan; any history of the results of any investigation on the nature of care and welfare of the parents' minor children; and the testimony of any person or expert produced by the court or any party who can testify what is best for the child.

Child support is based on the Income Shares Model, which means that the combined monthly net incomes of both parents is used in determining the obligation and divided proportionately between the parents. The non-custodial parents share determines the level of child support to be awarded, based on the number of children from the marriage.

Called the Income Shares Model, the order is based on the noncustodial parent's share and payable from the noncustodial parent to the custodial parent. The Income Shares Model estimates the amount of support that would have been available if the marriage had not failed. This estimated amount is then divided proportionally to the parents according to each parent's income. This is easy to do using the South Dakota child support worksheet. Pay records typically substantiate the estimated incomes. For example, the parent with the higher income is responsible for the larger portion of the child support, and vice versa. If a noncustodial Dad earns $4,000 a month, and a custodial Mom earns $1,000 a month, Dad's share of the support comes to 75 percent; Mom's 25 percent.

Generally, medical insurance coverage for the child and payment of medical bills is set out in the marital settlement agreement. Usually, if a reasonable medical insurance plan is available through one of the parent's employment, he or she is required to cover their child on it.

By state statute, the parents divide uninsured medical expenses based on the percentage each pays in child support after the first $250, which is paid by the custodial parent.

In South Dakota, parents divide the cost of childcare and medical insurances proportionally. Extraordinary medical bills may go to the noncustodial parent when they are not covered by insurance, but medical expenses for chronically ill children are divided proportionally. Child support pays for extracurricular school actives. South Dakota considers spousal income, number of children, and the number of overnights.

Service of Process for a Divorce in South Dakota

The plaintiff serving the Summons and Complaint can hire a professional process server or law enforcement official (like a sheriff or constable) to serve the documents personally, and then complete an Affidavit of Personal Service. The plaintiff can also send the materials to the defendant if the defendant signs and returns a Notice and Admission of Service of Summons and Complaint within 20 days.

Virtually all other documents can be served by first class mail or hand delivery.

Service by publication may apply when trying to serve someone who is very hard to locate, in the military, out-of-state, or in jail.