Unlike some jurisdictions, Pennsylvania does not offer a summary or simplified divorce, and it offers both fault and no-fault divorce.

Pennsylvania is an equitable distribution state, and alimony may be awarded.

Familiarize yourself with the requirements and processes below before filing for a no contest divorce in Pennsylvania.

Grounds for Divorce in Pennsylvania

There are two types of no fault divorce in PA: mutual consent, when the spouses agree that the marriage is irretrievably broken and 90 days have elapsed since the filing, and two-year separation, when one of the spouses refuses to consent to the divorce and the parties live separate and apart for at least two years. 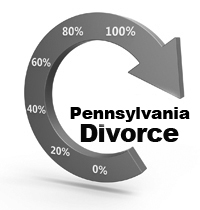 The plaintiff begins the action by filing two copies of the complaint in the county court and paying the filing fee. The clerk keeps one set and returns the other other to the plaintiff who arranges for the divorce papers to be served on the defendant. Here is more information regarding the process of filing uncontested divorce papers in Pennsylvania.

An indigent plaintiff may avoid fees by filing a In Forma Pauperis petition.

The divorce papers must be served within 30 days of filing. If the defendant agrees, the papers may be mailed by regular mail. The defendant signs an Acceptance of Service form that is filed with the clerk.

Of the two types of no-fault divorce, the mutual consent is fastest. In this regime, the couple resolves financial issues before filing, and they divorce in three to four months, not two or more years, as can be the case in other divorce actions. When spouses do not agree on the divorce, it can be nevertheless effected under the two-year rule.

Fault actions -- adultery, endangerment, desertion, imprisonment for at least two years, and indignities - often are contested and normally take much longer to resolve and cost much more due to legal expenses and additional court fees.

The divorce is finalized 90 days after the filing when both spouses sign the Affidavit of Consent. The plaintiff also sends a Waiver of Notice to the defendant. The plaintiff files a Praecipe to Transmit Record and a Final Decree of Divorce, which the judge signs after a review of the papers. The couple is then divorced. Learn the best ways to save money when doing your own divorce in Pennsylvania.

Do It Yourself Online Divorce in Pennsylvania

Our online divorce makes it easy to file your own divorce in the state of Pennsylvania. In as little as 20 minutes you can have all your completed divorce forms and filing instructions ready for signing and filing. Instantly access your completed divorce forms after a short online interview. It is that easy, no lengthy completion or delivery times. See if you qualify below:

Pennsylvania is an equitable distribution, dual-classification state. Unlike almost all jurisdictions, the appreciation of separate property is marital. The court accepts any fair and reasonable property division that the spouses reach.

In dividing property, the court generally does not consider marital misconduct, but economic misconduct - hiding sets in support of a girlfriend, for example - may result in off setting compensation to the victim spouse.

When couples can agree on a fair and equitable solution, courts consider several factors, including "the contribution by one party to the education, training or increased earning power of the other party"; "the contribution or dissipation of each party in the acquisition, preservation or appreciation of marital property, including the contribution of a party as homemaker"; and "whether the party will be serving as the custodian of any dependent minor children."

All marital property is divided equitably unless the spouses agree otherwise. Normally, the court values assets and liabilities at the time they are divided but the court may select any valuation date it deems to be appropriate.

Pennsylvania, like most states, does not consider advanced degrees as marital property.

Courts award alimony pendente lite to needy spouses after a divorce has been filed and up until the divorce is finalized, regardless of any misconduct. This type of alimony is awarded on an emergency basis.

Alimony may be ordered for a limited period of time or a longer period of time "depending in the circumstances an the interest of justice." The court may change alimony based on a change in circumstances, such as a sudden increase or decrease in either party's income.

Unlike many jurisdictions, Pennsylvania statutes do not include a best interest of the child standard, but courts apply specific factors, including "the mental and physical health of the parents and child" the adjustment of a child to home; "the ability of each parent to see the child's well being"; and "in some cases, the desires of the child."

In Pennsylvania, "shared custody" is used in lieu of "joint custody," and can refer to shared legal and physical custody (or both) that insures frequent physical contract with both parents. Courts permit a variety of custody regimes, but must consider all relevant factors in determining whether joint custody is workable.

Pennsylvania uses the Income Shares model to determine child support. In this routine, a child receives the same proportion of parental income that he or she would have be receiving if the parents had not divorced because in an intact household, both parents pool their income and spent it for the benefit of all household members, including any children. Income Shares, which is based on a principal in the Uniform Marriage and Divorce Act, considers the gross income of both parents and then establishes the proportion each contributes and divides it among their minor children.

Pennsylvania Service of Process for Divorce

After service, the process server completes an Affidavit of Service.