Besides the typical uncontested divorce procedure, Oregon offers a summary divorce, which ends a marriage without the cost and delay of a court hearing for childless couples that can file jointly and meet seven qualifications. A no-fault, uncontested Oregon divorce eases the pain and suffering and can help divorcing spouses move on in a quicker and less expensive fashion.

Oregon is considered an all property distribution state, and alimony may be awarded.

Familiarize yourself with the requirements and processes below before you file for divorce in Oregon.

The appropriate lawful ground for divorce in Oregon is one the spouses agree to and can substantiate or one the filing spouse proves in court.

Oregon is a no-fault state. A judgment for the dissolution of a marriage, domestic partnership or a same sex marriage is granted when irreconcilable differences between the parties have caused the irremediable breakdown of their marriage/domestic partnership.

Residency in Oregon for Divorce

The spouses meet residency requirements to divorce using Oregon courts. At least one spouse must be a resident and live in the state for six months.

A marital annulment, dissolution or separation must be filed in a county where one of the parties resides.

For a summary action, the couple must be married for 10 or fewer years; have no minor children and no older children currently enrolled in high school; own no real property or any interest in real property; own personal property, both individually and jointly, worth less than $30,000; owe individually and jointly of no more than $15,000; waive spousal support; and have no other divorce actions elsewhere. In a summary action, the petitioner files the following: Petition for Summary Dissolution, Summons, Acceptance of Service (if the spouse waives service), Declaration of Service, and Record of Dissolution of Marriage, Annulment, or Registered Domestic Partnership. 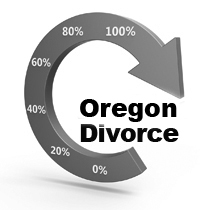 The petitioner returns the signed acceptance to the court, and the respondent files a response within 30 days of being served. After the respondent files an appearance, the spouses exchange financial information in discovery. Both spouses make a complete financial disclosure of assets and liabilities, including tax returns, wage & income records, credit card balances, automobile titles, pension and retirement plans, investment information, bank accounts.

In many uncontested actions, the respondent fails to appear after being served, so the case is decided by default in favor of the petitioner and in the absence of the respondent. A judge signs final documents submitted by the petitioner and both sides are bound by the signed Judgment of Dissolution of Marriage. Here is more information regarding the process of filing uncontested divorce papers in Oregon.

When either partner disputes custody or visitation, the court may order the parties to mediation and/or for evaluation by custody experts (some counties have social workers on staff or a Family Court Service for this purpose). This is to be expected in Oregon and is common in most states.

The divorce ends when the judge signs a Judgment of Dissolution of Marriage. Uncontested divorces move more rapidly and cost less than contested actions. Most divorce actions that start out contested often end as uncontested because the spouses do not want to have the court settle there disputes. Learn the best ways to save money when doing your own divorce in Oregon.

Do It Yourself Online Divorce in Oregon

Our online divorce makes it easy to file your own divorce in the state of Oregon. In as little as 20 minutes you can have all your completed divorce forms and filing instructions ready for signing and filing. Instantly access your completed divorce forms after a short online interview. It is that easy, no lengthy completion or delivery times. See if you qualify below:

Oregon is an all property state.

Oregon is an equitable distribution state and uses the dual classification scenario. Unlike most states, the appreciation of separate property is marital. When the parties are unable to reach a settlement, the Circuit Court classifies the property and then divides the marital estate equitably. Equitable does not mean equal, or even half, but rather what the judge considers fair. In dividing property, the court classifies assets and liabilities as marital or separate, then places a value on assets and debts, and then makes an assignment. In dividing property, the court often considers the parties' age and health, contributions to the marriage and economic circumstances and tax consequences.

The court accepts any fair and reasonable property division that the spouses reach by agreement.

Except for an inheritance, gifts or property owned before the marriage, all property acquired during the marriage is subject to distribution by the court.

In dividing property, the court generally does not consider marital misconduct.

When couples cannot agree on a fair and equitable solution, courts considers the amount of property and reasonable costs involved if assets must be sold, taxes, and other costs reasonably anticipated by the spouses such as medical bills, needs of children, retirement plans, pensions, and a spouse's homemaker contributions.

Retirement benefits are marital property and when the worker meets all the requirements for payout, he or she is vested. Retirement plans are either Defined Contribution Plans (DC), such as a 401(k), or Defined Benefit Plans (DB), which is the company pension. That part of a pension accumulated during a marriage is marital property and subject to distribution. When spouses share in each other's pension plan, a Qualified Domestic Relations Order (QDRO) must be prepared. The QDRO spells out the terms and conditions of the pension distribution.

Oregon courts award three types of spousal support: transitional, for the spouse to obtain the necessary training and education; compensatory, for the spouse provided a significant contribution towards the other spouse's career or education; and spousal maintenance, for a defined period or indefinitely. Factors used when determining spousal maintenance include the spouse's earning power, standard of living, and financial needs.

A homemaker for a spouse who had an economically advantageous position due to the joint efforts of both spouses, receives compensatory alimony, but the recipient of alimony or spousal support must make a reasonable effort to become self-supporting within 10 years or the support may be terminated.

In Oregon alimony influences the decision regarding the distribution of property, and it can become intricately involved in a divorce property settlement. Also keep in mind that The Circuit Court can order support on a case-by-case basis when spouses can not agree.

In all alimony orders, the court considers the duration of the marriage, tax consequences and "any other factors the court deems just and equitable."

In Oregon, child custody is awarded to either parent based on the best interest of the child. This is the basis for all decisions a court will make regarding children.

In Oregon in deciding custody, one factor cannot be used to the exclusion of another except for domestic or sexual abuse. "Oregon law does not require a parent to cooperate with another parent who is abusive. A parent who takes steps to prevent a child from being abused by the other parent is not considered to be uncooperative for purposes of evaluating custody rights." Oregon law expresses a preference for parents to share as equally as possible in the custody of a child, but an abusive parent will not receive sole or joint custody because the court presumes that the abusive parent is unfit unless he or she demonstrates otherwise.

One or both parents may be given either legal or physical custody, but when both parents can work together, the Oregon court normally awards both parents joint custody.

Courts enjoy wide latitude in determining visitation. The court may order supervised visitation when the court has reservations about the child's safety with one parent.

Courts modify custody arrangements only when the party seeking modification can prove that it is in the best interest of the child. For this to happen typically a significant change must occur.

Oregon uses the Income Shares model to determine child support. With this method, a child receives the same proportion of parental income that he or she would have been received if the parents had not divorced because in an intact household, both parents pool their income and spend it for the benefit of all household members, including any children. Income Share is based on a principal in the Uniform Marriage and Divorce Act. It considers the gross income of both parents and then establishes the proportion each contributes and divides it among their minor children.

In Oregon, a process server does not have to be licensed and can be anyone not a party to the action but authorized by the county court.

A party is considered personally served when he or she receives the summons personally. Leaving a copy of the divorce papers at the defendant's home with a mature person may also effect Service.