DO IT YOURSELF ONLINE DIVORCE IN OKLAHOMA

Filing a divorce yourself in Oklahoma is very common. When both spouses can agree on all the issues, they have what is called an uncontested divorce. Under this circumstance, the court plays little or no role in solving the marital issues, but rather expects proper divorce paperwork to be filed according to a specific divorce procedure.

A no-fault Oklahoma divorce happens when the marriage simply breaks down due to incompatibility, and neither spouse is at fault (this is the most common ground used for an uncontested divorce). Fault grounds include adultery, impotency, abandonment (for one year), insanity (for five years), extreme cruelty, imprisonment, habitual drunkenness, gross neglect, when the marriage was devised by fraud, when the wife was pregnant by another man at the time of marriage, or when a prior divorce is not recognized by the state.

Residency to File for Divorce in Oklahoma

The petitioner completes a Petition for Dissolution of Marriage, which contains factual information about the parties and states the grounds for the divorce, as well as a Cover Sheet, and in some instances a Summons. In an Oklahoma divorce, the grounds are usually listed as incompatibility. 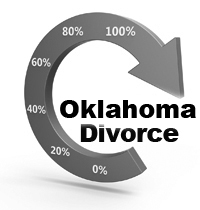 The Petition for Divorce is served upon the other spouse by a private process server, county sheriff, or by certified mail. Service can also be waived by the respondent by filing an Appearance and Waiver of Service.

Oklahoma courts also require a completed Financial Affidavit, an involved, eight-page form that requires detailed information about a party's income, assets, debts and budget. This is required because the court wants to make sure each party has adequately shared their financial information with one another prior to the divorce being finalized.

An uncontested divorce costs less than the contested court battle. In an uncontested action, the spouses control the division of the marital estate, and they create a custody and visitation plan that works for them. Not only is the case completed much more quickly, but also -- and equally as important -- the couple usually avoids the surprises that often occur when spouses duke it out in a court battle. When an Oklahoma divorce is contested, the case takes longer to complete because the parties go through the discovery process, in which they exchange documents and information, and wait for a space on the court's docket if the case goes to trial.

If the divorce is uncontested and the couple has minor children, there is a 90-day waiting period after the Petition is filed before the court grants the divorce. Divorces that do not involve minor children can be finalized in as few as ten days after the Petition for divorce is filed. Oklahoma is one of the faster states to file for an uncontested divorce. Here is more information regarding the process of filing uncontested divorce papers in Oklahoma.

In Oklahoma, neither spouse whose former spouse lives in the state may remarry, or even live with another person, within six months of the date of the final decree. Learn the best ways to save money when doing your own divorce in Oklahoma.

Do It Yourself Online Divorce in Oklahoma

Our online divorce makes it easy to file your own divorce in the state of Oklahoma. In as little as 20 minutes you can have all your completed divorce forms and filing instructions ready for signing and filing. Instantly access your completed divorce forms after a short online interview. It is that easy, no lengthy completion or delivery times. See if you qualify below:

Oklahoma is an equitable distribution state, meaning it divides property fairly but not necessarily equally. Oklahoma courts strongly encourage parties to agree on property distribution outside of court; otherwise, the court divides the property for them.

The court may consider a variety of factors unique to each marriage. Despite the court's relative freedom to decide what is just and reasonable, it considers how each spouse contributed to the marriage - including the contributions of a homemaker - and the conditions each spouse faces alone after the divorce, such as earning potential, medical needs, and childcare costs. The court reviews the length of the marriage, the health and ages of the spouses, tax consequences, and liabilities.

The court will not consider fault when awarding alimony, but either spouse may be granted alimony if the court thinks it is reasonable. The spouses may agree on an alimony amount and/or each can waive the right to alimony at their discretion by written agreement within the divorce papers.

Courts decide alimony on a case-by-case basis, without a definitive rule on how long a marriage must last before support can be awarded. The court determines both the length and amount of alimony to be paid when the parties cannot come to an agreement themselves. In general, courts apply a three-year to one-year ratio awarding alimony payments; e.g., for every three years of marriage, one year of alimony is ordered. However, courts may impose different alimony-award time measurements.

Alimony payments can be stopped or modified when the paying party dies. If the former spouse cohabits with a member of the opposite sex, the party paying alimony can petition for modification of the alimony judgment. In such cases the court may decrease or terminate future support payments if evidence shows that a substantial change in finances has occurred.

In Oklahoma, the court may give the spouse with physical custody of children a larger part of the couple's marital estate. This can be paid in a lump sum or through regular payments that the obligor makes to the county clerk, who conveys them to the recipient.

The court always considers the child's best interests when making child custody determinations, but most often judges prefer if the divorcing parents can come to agreement on child related decisions themselves.

In Oklahoma, courts take into consideration which parent permits the child frequent and continued contact with the other, regardless of gender. Gender of the parent does not determine custody.

Courts encourage parents to share the rights and responsibilities of parenthood but award custody based on the children's best interest when parents cannot agree. When determining the best interest of the child, the court considers the relationship the child has with each parent. Oklahoma does not prefer one parent to another on the basis of gender.

Oklahoma law expresses a preference for parents to share as equally as practically possible in the custody of a child in a divorce case. The courts consider joint custody favorably because it promotes the continuing relationship between the parents and the child, and both parents have joint rights and responsibilities in childrearing. The courts hold that joint custody is in the best interests of a child, but this does not imply an equal division of the child's time between the parents or an equal division of financial responsibility for the child.

In joint custody, both parents have joint rights and responsibilities; however, this regime may work if the child's welfare is at risk with the other parent.

The court does grant significant latitude to the parents in developing their own joint custody plan when determining child custody in a divorce, legal separation or paternity case.

In deciding child custody, the court considers the child's wishes or preferences, provided that he or she is mature enough to make such preferences; the parents' willingness and ability to encourage continuing, frequent contact between the child and the other parent; the results of any investigation or inquiry about the care and welfare of the parents' minor children; the mental or physical health of the parties involved in the proceedings; any history of domestic violence, child abuse, negligence, or substance abuse; and any other issues directly affecting the child's physical and moral well-being.

The Oklahoma courts have full discretion when determining visitation between children and parents.

Child support is based on a Child Support Guideline Schedule. Oklahoma uses the Income Shares Model, which takes into account each parent's gross income. In this routine, a child receives the same proportion of parental income that he or she would have been received if the parents had not divorced because in an intact household, both parents pool their income and spend it for the benefit of all household members, including any children. Income shares considers the gross income of both parents and then establishes the proportion each contributes and divides it among their minor children.

Sometimes, courts consider extraordinary expenses, independent income, seasonal fluctuation in parents' income, special needs as well "any other reason that should be considered to make child support more equitable." Extraordinary expenses are either add-ons, where the expense is added to the support payment, or deductions, where the amount is deducted, and indicated as either mandatory or permissive.

The court may deviate from child support guidelines when it finds that their application "would not meet, or would exceed, the reasonable needs of the child."

Oklahoma courts deviate from the standard computation only if one parent is paying dental or medical insurance for the child, when parents have joint custody, or when one parent pays child care expenses or compensates for a child's special medical, educational or transportation needs. If there is a disparity between the two parents' respective incomes, the parent who earns more money may pay child support to the other.

Process of Service for Divorce in Oklahoma

At the election of the plaintiff, process, other than a subpoena, shall be served by a sheriff or deputy sheriff, a person licensed to make service of process in civil cases, or a person specially appointed for that purpose. The court can make special appointments to serve process.