In August 2010, New York became the last jurisdiction in the United States to offer no-fault divorce, when Governor David Paterson signed no-fault divorce into law. Until 2010, New York recognized divorces only upon fault-based criteria or upon living separate and apart per a signed and filed separation agreement for a period of one year.

New York is an equitable distribution state, and alimony may be awarded.

Among the supporting divorce paperwork is a Sworn Statement of Removal of Barriers to Remarriage (Form UD-4) by which the plaintiff swears that he or she has taken "all steps solely within my power to remove all barriers to the Defendant's remarriage following the divorce." No other state requires such an affirmation.

Familiarize yourself with the requirements and processes below before you file for divorce in NY.

Irretrievable Breakdown, which means the relationship between the spouses has collapsed irretrievably for at least six months. This is the no-fault ground used in an uncontested divorce. The courts in New York do not hand down a divorce on these grounds until property, custody, visitation, spousal support, and child support are settled or decided.

Even when the action is uncontested, a New York divorce requires the completion of many supporting documents and forms. 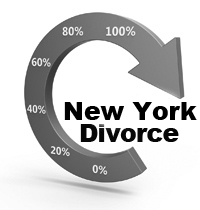 The filer completes the Summons with Notice (Form UD-1) or the Summons (Form U-1a) and Verified Complaint Form UD-2), which identifies the filer as the plaintiff and the other spouse as the defendant. Both forms require extensive information, including grounds and relief, such as child support and division of property and alimony.

The plaintiff has 120 days from the date of filing to serve a copy of the summons and complaint on the defendant. Here is more information regarding the process of filing uncontested divorce papers in New York.

The filer makes one original and two copies of the summons and complaint, and the clerk assigns an index (case) number to each as well as a filing date. The completed forms are filed in the clerk's office of the county where either spouse lives. Learn the best ways to save money when doing your own divorce in New York.

If the defendant agrees with the allegations in the complaint (and the divorce) he or she completes an Affidavit of Plaintiff (Form UD-7) and returns it within 40 days. If the plaintiff does not return the affidavit, then the server needs to prepare an Affidavit of Service (Form UD-3), which proves service of process. If the defendant disagrees with any part of the action, he or she files a Notice of Appearance, and the divorce becomes contested. When a divorce is contested, both spouses should hire separate lawyers.

An uncontested divorce begins with the Complaint for Divorce and is the simplest way to end a marriage. Among the supporting divorce paperwork is a marital settlement and agreement which addresses all the sissies including those regarding the children.

Both partners must complete a Statement of Net Worth and exchange them to come to a fully informed agreement. The court reviews all financial agreements, making certain that child support is adequate and that property division is fair.

Thirty days after the summons and complaint are served, either party files a Request for Judicial Intervention (RJI) that moves the case before the judge.

In addition to the summons and complaint, the plaintiff completes 10 additional forms in order to place the action on the court calendar. Two more forms are required if the plaintiff does not return the Affidavit of Defendant, and spouses who have children must complete three forms related to child support. Yes, there is a lot of paperwork to be filed to obtain a divorce.

An uncontested divorce in New York, start to finish, can be completed in 10 weeks when all divorce paperwork is properly completed and submitted according to the proper divorce time-line.

Do It Yourself Online Divorce in New York

Our online divorce makes it easy to file your own divorce in the state of New York. In as little as 20 minutes you can have all your completed divorce forms and filing instructions ready for signing and filing. Instantly access your completed divorce forms after a short online interview. It is that easy, no lengthy completion or delivery times. See if you qualify below:

New York is an equitable distribution, dual-classification state, where the appreciation of separate property is separate. In dividing property, the court does not consider marital misconduct, but economic misconduct - hiding assets in support of a girlfriend, for example - may result in off setting compensation to the victim spouse.

When couples can agree on a fair and equitable solution, courts consider 13 factors, including "the wasteful dissipation of asset by either spouse"; "any transfer or encumbrance made in contemplation of matrimonial action without fair consideration"; "any other factor that the court shall expressly find to be just and proper."

New York considers advanced degrees marital property, unlike many states, and present and future income from these may be subject to distribution.

As in other jurisdictions, divorcing couples normally sell the marital home and divide the profits, sell the home to one party and refinance, or the custodial parent occupies the house until the last child leaves school and then sell it.

Retirement benefits are marital property when the worker meets all the requirements for payout. This is called vested. They are either Defined Contribution Plans (DC), such as a 401(k), or Defined Benefit Plans (DB), which is the company pension. That part of a pension accumulated during a marriage is marital property and subject to distribution. When spouses share in each other's pension plan, a Qualified Domestic Relations Order (QDRO) must be prepared. The QDRO spells out the terms and conditions of the pension distribution.

New York awards alimony, which it calls maintenance, to either spouse to make a divorce more equitable, and courts base support on the needs of a party. The court decides the duration of support and orders changes based on the current circumstances of the payer and the recipient.

Maintenance may be temporary, short- and long-term, and in ordering it, the court considers 11 factors, including "any other factor which the court shall expressly find to be just and proper." This factor provides the court much flexibility when defining a spousal support order.

Like other jurisdictions, the best interest of the child controls decisions about custody, and the courts decide this considering a number of factors, including the parents' care abilities and cooperation, their work schedules and health issues, allegations of domestic violence, and the child's preference (depending upon the age of the child).

In New York joint custody means both parents make "major decisions about the needs as joint custodians; they jointly decide what's best for the child." Courts permit a variety of custody regimes, but must consider all relevant factors in determining whether joint custody is workable.

Divorcing parents with minor children may be required to complete a parenting class unless the court waives the requirement.

New York uses statutory Child Support Guidelines, which are assumed to be correct unless one party demonstrates the "amount is unjust or inappropriate" based on a consideration of factors including financial resources of all the parties, standard of living before the divorce, physical and emotional health of the child, non-monetary contributions the parents make, education needs of either parent, other children to be cared for, and "any other relevant factor." Under this regime, one child receives 17 percent of the parents' combine incomes; 2,3 and 4 receive respectively, 25, 29 and 31 percent.

Sometimes, after calculating support, courts permit adjustments up or down that are called deviation factors. Courts can decide support guidelines are unjust based on any "relevant deviation factor."

Courts order temporary child support during custody and support actions, and either parent may be order to pay according to the temporary orders up until the time of the divorce being finalized.