DO IT YOURSELF DIVORCE IN NEW MEXICO

Filing an uncontested divorce in New Mexico is very common. In cases where both spouses agree and are willing to sign the paperwork, the New Mexico filing procedure can be done quickly without any great expense. When the spouses are in agreement it helps facilitate a smoother divorce process as well as decrease court and legal expenses.

A divorce in New Mexico may be granted based on the following grounds: no-fault, which means incompatibility, or fault grounds of cruel and inhuman treatment, adultery, or abandonment.

One spouse must have resided in New Mexico for at least six months immediately preceding the date of the filing and have a residence in New Mexico to file for a dissolution of marriage. The same applies to military personnel stationed in New Mexico. The proceedings may be instituted in the county where either of the spouses reside. 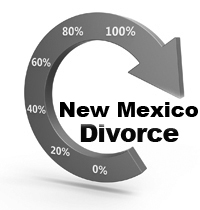 The petitioner files the divorce papers in the judicial district court for his or her county, and pays a filing fee or requests a fee waiver when he or she cannot afford the filing fee. The court may waive the filing fee, but this is decided on a case by case basis.

When filing, the petitioner should bring multiple copies of all documents of the divorce paperwork. The court clerk stamps the copies, one of which is then served on the other spouse.

The spouses exchange financial information no later than 45 days after the filing. One of the financial disclosure forms, called the "Notice of Compliance with Rule 4-123 NMRA," lists all of the other financial forms that must be exchanged.

Do It Yourself Online Divorce in New Mexico

Either spouse may request alimony. Typically a couple must be married for at least ten years before the court considers alimony, and the burden of proof of need must be demonstrated by the party seeking support. The New Mexico courts have discretion in awarding alimony. The court considers a variety of factors including the reasonable needs of the respective spouses, particularly the standard of living of the spouses while married.

Spousal support may be awarded on a rehabilitative, transitional, or indefinite basis; however, courts are reluctant to award the traditional form of long-term alimony, payable until the receiving spouse dies or remarries, because judges want to see the parties become self-sufficient. Alimony is either modifiable or non-modifiable.

Either joint custody or sole custody can be granted; however, New Mexico law expresses a preference for joint custody so that parents share as equally as practically possible in the custody of a child in a divorce case. Joint custody allows both parents joint rights and responsibilities in raising a child, and strengthens the parent-child bond even after divorce. However, this is not always possible in cases where the child's welfare is at risk with one of the parents.

If child custody is contested, the court may appoint a guardian ad litem to appear for the minor children. The court shall also refer the case to mediation if feasible unless a party asserts, or it appears to the court, that domestic violence or child abuse has occurred.

The New Mexico courts have full discretion when determining visitation between children and parents.

New Mexico Process of Service for Filing a Divorce