Grounds for Divorce in New Jersey

The no-fault causes are separation and irreconcilable differences. For a divorce on the grounds of separation, a party proves that the spouses have lived separate and apart for at least 18 consecutive months and that there is no reasonable prospect of reconciliation; for a divorce based on irreconcilable differences, a party proves that the marriage is irreconcilably broken down for at least six months and without reasonable prospect of reconciliation. These no-fault grounds provide an avenue to end your marriage without placing the blame on your spouse.

Either spouse must have been a resident for at least one year before filing of the action, with the exception of an action for adultery. In cases of adultery the requirement is that at least one spouse must be a New Jersey resident.

The plaintiff or petitioner makes at least three copies of the complaint and other divorce papers. The New Jersey County Court reviews one copy and needs two self-addressed stamped envelopes, so the papers maybe returned. After the court returns the complaint stamped filed, the plaintiff completes a summons and serves the paperwork by county sheriff where the defendant lives, or mails it certified mail. 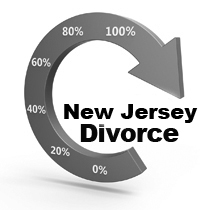 After 35 days, the defendant must file an appearance, which means that he or she does not object to the divorce but may object to issues such as child support or custody; an answer, where he or she agrees or disagrees with the complaint; or a counterclaim, in which he or she asserts new claims for the divorce. Here is more information regarding the process of filing uncontested divorce papers in New Jersey.

Within 45 days, each spouse must provide detailed financial information, including three years of federal and state income tax returns, bank and investment account statements, four recent pay stubs and documentation for health insurance, loan application and financial statements. This shows the court that full financial disclosure from one party to the other took place.

The no-fault and uncontested divorce in NJ routines are the "quickest, easiest and most cost-effective" options to end a marriage.

New Jersey does not have a required waiting period after filing for divorce. Learn the best ways to save money when doing your own divorce in New Jersey.

Do It Yourself Online Divorce in New Jersey

Our online divorce makes it easy to file your own divorce in the state of New Jersey. In as little as 20 minutes you can have all your completed divorce forms and filing instructions ready for signing and filing. Instantly access your completed divorce forms after a short online interview. It is that easy, no lengthy completion or delivery times. See if you qualify below:

New Jersey is an equitable distribution, dual-classification state. The appreciation of separate property is separate. The court accepts any fair and reasonable property division that the spouses reach.

In dividing property, the court generally does not consider marital misconduct, but economic misconduct - hiding sets in support of a girlfriend, for example - may result in off setting compensation to the victim spouse.

When couples cannot agree on a fair and equitable solution, courts consider 16 factors, including "the economic circumstances of each party at the time division of property becomes effective"; "the contribution of each party in the acquisition, preservation or appreciation in the value or amount of marital or nonmarital property as well as the contribution of a party as homemaker"; and "any other factors which the court may deem relevant."

All marital property is divided equitably unless the spouses agree otherwise. Normally, the court values assets and liabilities at the time they are divided but the court may select any valuation date that it feels is best suited to make the distribution of property fair.

Once handed down, a New Jersey property division order cannot be modified unless there are "exceptional and compelling" circumstances for the sake of "fairness and justice."

New Jersey considers several factors in awarding alimony, including "any factors which the court may deem relevant."

In New Jersey, the best interest of the child is the primary concern in child custody and that can mean joint or sole custody.

Courts permit a variety of custody regimes, but evaluate 10 considerations to determine whether joint custody is workable.

New Jersey expresses a preference for both parents to share as equally as practically as possible in the custody of a child. Joint custody gives both parents equal right and responsibilities.

New Jersey uses the Income Shares model to determine child support. In this routine, a child receives the same proportion of parental income that he or she would have been receiving if the parents had not divorced because in an intact household, both parents pool their income and spent it for the benefit of all household members, including any children. Income Shares, which is based on a principal in the Uniform Marriage and Divorce Act, considers the gross income of both parents and then establishes the proportion each contributes and divides it among their minor children.

Service of Process for Divorce in New Jersey

In New Jersey, process is a summons and a copy of the complaint.

A party is considered personally served when he or she receives the summons personally.