DO IT YOURSELF DIVORCE IN NEW HAMPSHIRE

Filing your own divorce in New Hampshire is very common, especially when you and your spouse agree and are both willing to work together to finalize the divorce. Cooperation in a divorce makes it a much smoother and less expensive experience. Almost all divorces in New Hampshire that are filed without a lawyer are uncontested divorces, one in which you and your spouse both agree on all the issues related to dissolving your marriage.

The grounds for divorce in New Hampshire fall into two categories: no-fault and fault. The no-fault category means that the parties have irreconcilable differences, which have caused the irremediable breakdown of the marriage. The fault categories allege Impotence, adultery, extreme cruelty, imprisonment for more than one year, injury or endangerment, desertion for up to two years together, habitual drinking, and refusal to cohabit with the other for six months.

When filing a Petition for Divorce, the grounds for the request must be listed in order for the case to be filed with the county clerk.

Both spouses must reside in the state for at least one year. If, however, one of the spouses has not been a resident for one year and the other has, and the cause for the divorce happened in the state, then the court recognizes the residency. Spouses who reside in different counties may file in either one of the counties.

When both spouses agree to divorce in New Hampshire, they can use the Joint Petition for Divorce. 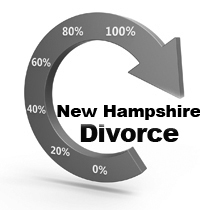 To begin, the spouses do not need to agree on all the terms and conditions of the divorce; they just need to agree to start the process. They sign the Joint Petition before a notary public or justice of the peace, which lists the the parties as co-petitioners.

A spouse can file an individual Petition for Divorce if desired. In this situation, the spouse starting the divorce is called the petitioner; the other spouse is the respondent.

Filing an answer is not required, but if the respondent disagrees with any statements in the divorce Petition, he or she writes an answer and mails it to the court with a copy to the petitioner. In the Answer, the respondent responds to the Petition and may contest the allegations in the Petition, and argue for favorable decisions regarding issues like child support, parenting rights or alimony.

When the court believes there is a chance for reconciliation, it can require that the couple seek marriage counseling. Since each case is handled according to its own unique scenario, there is no set length defined for the counseling sessions. Here is more information regarding the process of filing uncontested divorce papers in New Hampshire.

The documents required to complete a divorce may vary from case to case. The Petition For Divorce and Divorce Decree are standard and always required. Additional documents that may be requested deal with marital assets, finances, personal statistics and a notice of hearing if the case is to be heard by the court. Learn the best ways to save money when doing your own divorce in New Hampshire.

Do It Yourself Online Divorce in New Hampshire

New Hampshire is an equitable distribution state, and an all property state. All property in the marriage is considered for division and distribution. The increase in the value of property is also marital.

The New Hampshire court determines what is fair regarding marital property and alimony. Determining factors include the length of the marriage, the education of both parties, and the ability for both to support themselves, sources of income, and the actions of either party that led to the divorce. Issues surrounding alimony or spousal support are viewed solely on a case-by-case basis in New Hampshire, so it is a good idea for the couple to come to an agreement and then file it with the court.

The courts generally accept a fair and reasonable property division the parties agree to, but if the spouses cannot agree, the New Hampshire Court divides the marital estate within the Judgment of Divorce (Final Decree).

After the court classifies assets as marital or separate, it considers the contribution each spouse made toward the marital estate; the current and future economic status of the spouses; the duration of the marriage; and the custody arrangements of minor children.

In New Hampshire courts award alimony when a needy spouse lacks the income or property for his or her reasonable needs and the other spouse can pay; and "the spouse is the custodian of a child whose condition or circumstances make it appropriate that the custodian not seek employment outside the home."

Courts view Issues surrounding alimony or spousal support are viewed solely on a case-by-case basis in New Hampshire. Alimony influences the distribution of property, and it can become intricately involved in a divorce settlement.

Courts may award temporary, granted at the discretion of the court during the divorce proceedings and before the final Decree; short-term, to allow the recipient time to gain necessary skills; and long-term, or permanent, usually reserved for lengthy marriages.

New Hampshire prefers the parents resolve custody and visitation issues. The court listens to the parents' wishes. However, if no agreement can be made, there is evidence of abuse, or a parent appears unable to care for their child, the court intervenes to find the best option for the minor child's well being. Like all the jurisdictions, the best interests of the child guide the court.

Custody is not granted based solely on the financial capacity of the parent, or the gender of either the parent or the child.

The divorce papers may also be sent by registered mail, postage prepaid, by the petitioner or his or her attorney to the respondent at his last known abode or place of business. His or her return receipt and an Affidavit of Compliance, of the petitioner or petitioner's attorney, becomes part of the record. When process is not delivered or accepted by the respondent, the court may order such additional notice, if any, "as justice may require."