DO IT YOURSELF DIVORCE IN NEVADA

Nevada's no-fault and uncontested divorce process will help decrease the time and cost of getting a divorce.

Alimony may be awarded.

The Petitioner must live in a county and in Nevada for six weeks before the divorce is filed. The action may be brought in one of the following: the county where the cause happened, the county the defendant resides, the county the plaintiff resides, or the county in which the spouses last cohabited.

Couples who agree on everything can file a joint petition action for divorce in the Nevada Court system, for which they complete a Petition of Divorce (original and three copies); Affidavit of Resident Witness; Certificate of Service or Waiver, and Child Welfare and Identification Sheet (if there are minor children). 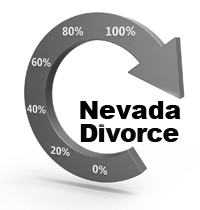 When spouses cannot agree on the terms and conditions of the divorce, the filing spouse must file a regular Petition for Divorce, which requires, in addition to the documents above, a Summons and the papers must then be served to his or her spouse. Here is more information regarding the process of filing uncontested divorce papers in Nevada.

In Nevada, anyone filing an action for divorce, annulment, custody, or separate maintenance must file a Financial Disclosure Form, which lists the party's assets and debts. The form must be filed within 45 days after service of the original Petition for Divorce.

If the spouses reach an agreement before the case moves forward, the petitioner files a settlement agreement and presents it to the court. In most cases, divorcing couples prefer dividing their property instead of having a judge decide. Settlement saves money and gives the spouses more control over their divorce.

After the papers are filed with the court it normally takes one to two weeks for an uncontested divorce. Learn the best ways to save money when doing your own divorce in Nevada.

Do It Yourself Online Divorce in Nevada

The court accepts any fair and reasonable property division that the spouses can agree upon.

Although the court excludes separate property at division, it must presume that all property acquired during marriage is community property. To keep something gained during marriage out of the property division, a party must give the court clear and convincing proof that it was owned before marriage, or was a gift intended only for one person, or one of the other justifications that characterize property as separate.

Even if an asset is proven separate, the court might set it aside to cover alimony, child support, or a community debt.

Real property like the family home, personal property like jewelry, and intangible property like income, dividends, and benefits are commonly divided at divorce. Liabilities, or debts, must also be divided or assigned to one spouse or the other. Just like other property, before dividing a debt, the court has to characterize it as community or separate based on when it was acquired, who acquired it, and how it was used. Then the court will apply the factors below to assign responsibility for it.

From a starting point of equal division, the court can shift the property rights from one spouse to the other based on the unique circumstances of the marriage. A custodial mother may get more of the community property, for example, when she has custody but fewer financial resources than her husband because she stayed home during marriage.

The court will not, however, increase her share of community property because her husband's faithlessness caused the marriage to fail. The law allows the court to distribute the community property unevenly based on compelling reasons, but those reasons tend to be economic rather than moral; they can't be based on fault.

Once handed down, a Nevada property division order cannot be modified unless there are "exceptional and compelling" circumstances for the sake of "fairness and justice."

Alimony is not designed to punish a spouse, so fault is not considered here, either; however, a party might be entitled to alimony if the divorce makes it difficult for him or her to maintain the standard of living he or she enjoyed during the marriage. The alimony helps offset any gap between the spouses in employability or assets. Alimony helps the recipient adjust to the financial situation that is a result of the divorce.

Alimony can help bridge at least part of the financial gap for a spouse who contributed more of the unpaid work during marriage, or even if he or she brought monetary resources to the marriage but his or her age, health, ability to work, or some other factor leaves him or her unfairly disadvantaged at divorce.

The amount and duration of payments depends on factors such as age and health, but also on how she contributed to the marriage - including the contribution of a homemaker - and what your obligations will be after divorce.

Any award for alimony must be just and equitable, so the court can't ignore a spouses's ability to pay. In accounting for both spouses' financial conditions, the court can order alimony in lump sum payments or to be made on a schedule.

In Nevada, support can influence property distribution, and it can become a very intricate part of the outcome of any divorce. In Nevada, court may award three types of alimony: temporary, (alimony pendente lite), awarded during the divorce proceedings and before the final decree; short- term, awarded to allow the recipient time to gain necessary skills; long-term or permanent, granted to a spouse who has significant needs, usually reserved for lengthy marriages where the receiving spouse is at a disadvantage in the job market.

Nevada considers 13 factors in awarding alimony, including "factors which measure the financial condition in which the parties will be left as the result of the action under which the determination of maintenance is made"; and "probable duration of the need of the party seeking support and maintenance. "

In Nevada, the best interest of the child is the primary concern in child custody and that can mean joint or sole custody. Nevada expresses a preference for both parents to share as equally as practically as possible in the custody of a child. Joint custody gives both parents equal right and responsibilities.

Divorcing parents with minor children may be required to complete a parenting class unless the court waives requirement. Often times divorces are delayed because one spouse has not completed the requirement and has not submitted the certificate of completion the court.

Nevada Service of Process for Divorce

Unlike most states, Process servers must be licensed, and the license fee is currently one of the most expensive states in the nation to get a process server license. They must be at least 21, and/or have over two-years experience. In Nevada divorce cases, personal service is preferred, which means delivery to the respondent personally, or by leaving the divorce papers at his or her house with some person of suitable age and discretion, or by delivering a copy of the Summons and Petition to an agent authorized by appointment or by law to receive process. The divorce papers are also mailed to his or her residence.

Courts permit Service by Publication when the defendant lives out of the state, or conceals himself or herself, or cannot be found after due diligence. The court issues an order permitting service by publication, which directs the publication in a newspaper, published in Nevada, for a period of four weeks, and at least once a week during said time. After publication, the defendant has 20 days to appear and answer or otherwise plead. The service is complete after four weeks from the first publication, and in cases when the divorce papers are also mailed, at the expiration of four weeks from such deposit.