DO IT YOURSELF DIVORCE IN NEBRASKA

The actual divorce process in Nebraska can require the completion of as many as more than 20 forms. An uncontested divorce will yield a few less documents, but many will still need to be completed and filed as part of court formality.

The court grants dissolution of marriage based on an irretrievable breakdown of the marriage. Nebraska is a no-fault only state. This means the marriage is irretrievably broken and there is not possibility of reconciliation.

The court also grants dissolution when a party is mentally ill and lacks the ability to consent to a divorce or because of drug and alcohol abuse. These grounds are much less common as they require significant proof before the Nebraska divorce would be granted.

Residency Rules for Filing for Divorce in Nebraska

Nebraska requires that one spouse reside in the state for at least one year before filing. A divorce action may be filed if the marriage ceremony was performed in the state, or if either spouse resides in Nebraska from the time of the marriage until the divorce action is filed. The petitioner must have a bona fide intention to reside in the state. Military service personnel continuously stationed in Nebraska for one year or, if married in the state also meet the residency requirement and may file for divorce. 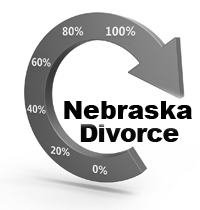 Filing the Nebraska divorce papers -- the Complaint, the Vital Statistics Certificate, and the Confidential Party Information and Social Security forms - initiate the divorce action. Different forms are filed depending on whether the spouses have children and whether a party is the plaintiff or the defendant.

The divorce Complaint identifies each child (if any) whose custody or welfare may be affected by the divorce, and it must state the relief sought, such as child custody, property and child support or alimony.

After paying the court filing fee (or getting it waived if the plaintiff is indigent) and presenting the correct, complete forms, the clerk creates a divorce file and assigns it a case number.

After filing the papers, the defendant must be served within six months of filing by personal service by hand-delivery or substituted service by mailing the Complaint, or the case is automatically dismissed.

Within 20 days of be served, the server, other than by certified mail, makes proof of service to the court that the process of service was made. Here is more information regarding the process of filing uncontested divorce papers in Nebraska.

In a contested divorce both spouses complete the Financial Affidavit, which happens when the parties do not agree on all the terms and conditions. These financial affidavits outline the income and expenses of both spouses fro the court. They are also required to share this information with each other.

In Nebraska, there is a 60-day waiting period after the dissolution is filed until the court grants the dissolution. If there are children involved or if there is any dispute over property, the divorce will most likely take longer. best ways to save money when doing your own divorce in Nebraska.

Do It Yourself Online Divorce in Nebraska

Our online divorce makes it easy to file your own divorce in the state of Nebraska. In as little as 20 minutes you can have all your completed Nebraska divorce forms and filing instructions ready for signing and filing. Instantly access your completed divorce forms after a short online interview. It is that easy, no lengthy completion or delivery times. See if you qualify below:

The purpose of division of property is the equitable distribution of marital assets. The courts generally accept a fair and reasonable property division the parties agree to, but if the parties cannot agree, the property is divided by the District Court within the Judgment of Divorce.

Nebraska is an equitable distribution state, and it uses the dual classification model. The court divides marital property in an equitable fashion unless the spouses agree otherwise. Equitable does not mean equal, or even half, but rather what the District Court considers fair. Being a dual classification state, Nebraska separates separate property, which is immune from distribution because it is separate from marital property, which the couple acquired together. The marital estate is subject to equitable distribution, not separate property.

After the court classifies assets as marital or separate, it considers the contribution each spouse made toward the marital estate; the current and future economic status of the spouses; the duration of the marriage; and the custody arrangements of minor children.

In Nebraska alimony is discretionary and it may be temporary, short- and long-term.

In awarding alimony, the courts consider the circumstances of the parties; the length of the marriage; and the history of the contributions to the marriage by each party, including "contributions to the care and education of the children, postponements of personal careers or educational opportunities, and the ability of the supported party to engage in gainful employment without interfering with the interests of any minor children in the custody of such party."

Like courts in all the jurisdictions, The Nebraska court determines child custody and visitation according to the best interests of the child. The court seeks to maintain the continued involvement of both parents in the child's life. The best interests of the child includes consideration of the relationship of the child with each parent, the child's desires and wishes, to the extent that they are based on sound reasoning, the health, welfare and social behavior of the child, and credible evidence of any abuse of, or by, any family or household member.

Nebraska courts often require all divorcing parents with minor children to complete a mandatory parenting class before granting a divorce, and a popular choice is Children in Between, which may be viewed on line.

Child custody laws in Nebraska are gender neutral. The courts may not give any preference to mothers or fathers because there is no presumption in Nebraska that parents of either gender are more fit or more suitable to be custodial parents, make decisions, or provide childcare.

A Nebraska family court judge may rule that the parents must share joint custody of the child, even if the parents have decided differently.

Child support in Nebraska is awarded according to guidelines issued by the state Supreme Court. The guidelines are considered in the best interests of the child unless either or both parents produce sufficient evidence to rebut the legal presumption that their application would lead to a fair and equitable support order.

Nebraska uses the Income Shares Model to determine the amount of child support the noncustodial parent pays. This regime considers the net income of both parties for purposes of the calculation of child support, which is the amount after certain allowable deductions, including income taxes, Social Security deductions, support paid for children of a prior relationship or a percentage of income to be applied to children of a current relationship, union dues and retirement contributions if they are mandatory. The court calculates support based on the gross monthly income of the parents, the cost of health insurance, the cost of day care, and the cost of providing support to others (such as parents or minor children of other marriages).

In this routine a child receives the same proportion of parental income that he or she would have been received if the parents had not divorced because in an intact household, both parents pool their income and spend it for the benefit of all household members, including any children. Income Share considers the gross income of both parents and then establishes the proportion each contributes and divides it among their minor children.

Extraordinary medical expenses, childcare, and secondary education support are all extraordinary expenses. Other expenses may be deviation factors.

Nebraska Service of Process for Divorce

Service on the respondent can be accomplished a few different ways; however, Nebraska requires personal service by hand-delivery or substituted service by mail.

Generally, a plaintiff elected to effect process by personal service, which is made by leaving the divorce papers with the defendant. This means delivering the divorce papers personally to the defendant or leaving a copy of the papers at the individual's house or usual place of abode with some person of his or her family over the age of 15, or by delivering a copy of the papers to an agent authorized by appointment or required by law to receive service of process.

If the respondent does not want to be served directly, he or she may complete an Answer and Waiver of Service. As part of this, the respondent is acknowledging that he or she has received a copy of the petition and that the court has authority over the case.

The Answer can also be used to file the respondent's official response to the divorce petition. The respondent states whether he or she agrees with or disputes any of the petitioner's statements or allegations.