DO IT YOURSELF ONLINE DIVORCE IN MONTANA

Montana offers a summary divorce that is about as simple as it gets. The marriage must be childless and the wife may not be pregnant. The parties may not have more than $25,000 in assets or more than $8,000 in unsecured debt. If all criteria can be met, a summary divorce can be had in 20 days.

The next easiest (and most common) way of filing for divorce in Montana without a lawyer is if the divorce is simply uncontested and both parties are willing to sign the paperwork. With a few more documents to file than the summary divorce option, a Montana divorce can be finalized in a month or two.

Grounds for Divorce in Montana

The ground is one the parties can substantiate, or one that the filing spouse proves to the court. State law offers three grounds for a Montana divorce: irretrievable breakdown of the marriage, living apart for at least 180 days before filing, and "serious marital discord that adversely affects the attitude of one or both of the parties toward the marriage."

Residency Rules for a Montana Divorce

One spouse must reside in Montana, or is a member of the armed services stationed in the state, for 90 days immediately before the filing of divorce.

The Montana divorce papers include the Petition, a Summons, a Financial Disclosure, and an Acknowledgement. Couples with children must also file a Notice of Filing Child Support Guidelines Financial Affidavit, a Notice and Acknowledgment to Child Support Enforcement Division, a Child Support Worksheet and a Proposed/Final Parenting Plan. 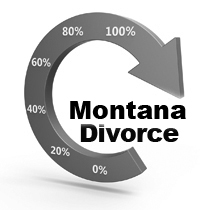 The papers are typically filed in one of the 22 judicial district court of the petitioner's county.

A simplified divorce is also called an uncontested divorce. When both parties agree on all issues, they file for divorce as co-petitioners rather than as petitioner and respondent. They would then file an agreement detailing the terms of their settlement.

Although Montana offers only no-fault grounds for divorce, one spouse may contest the action. When divorcing spouses work together, ending a marriage is much easier; however, when one spouse denies that the marriage is irretrievably broken because he or she does not want the divorce, the action becomes contested.

The court may postpone the action for 30 to 60 days and suggest marriage counseling. The court then holds a conciliation conference and decides whether the marriage is fractured. During this time, the court seeks evidence and rules on whether the grounds stand. When a conciliation conference fails or spouses can't agree on issues of property, support and custody, then they are bound for trial. Either a judge or a referee of the court decides the issues and enters a Final Decree. Here is more information regarding the process of filing uncontested divorce papers in Montana.

Each spouse completes a financial disclosure form, which provides the court and the other spouse essential information about finances and is used both in settlement negotiations and guides the court should the case require a hearing or trial regarding financial issues. Learn the best ways to save money when doing your own divorce in Montana.

Do It Yourself Online Divorce in Montana

The court encourages spouses to divide their own regarding marital property. If the court must intervene, it takes several factors into account including, but are not limited to, whether or not one spouse will receive alimony payments, the earning capacity of both spouses, length of the marriage, contribution of the homemaker if applicable, custody arrangements, and debts and age.

If the parties cannot reach an agreement as to the division of property, the court divides all property acquired during the marriage except for inherited property. Montana divorce laws provide for an equitable distribution of all property and debt. An equitable division may not necessarily be an equal division.

After the court classifies assets as marital or separate, it considers the economic circumstances of each spouse at the time the division of property is to become effective; the contribution of each spouse to the acquisition of the marital property, including the contribution of a spouse as homemaker; the value of the separate property set apart to each spouse; the conduct of the parties during the marriage; and the custodial arrangements for minor children.

Alimony and Spousal Support in Montana

The court may not consider fault in granting alimony.

Either spouse may seek and receive alimony, and the court determines the duration and amount if the parties do not otherwise agree.

The length of time depends on the parties' needs, duration of the marriage, and whether dependent children require one spouse to stay at home.

In Montana, alimony influences the distribution of property, and it can become important in a divorce settlement. When spouses are unable to reach an agreement on this issue, the District Court can order support on a case-by-case basis.

Montana courts grant temporary, short- and long-term alimony. Transitional spousal support may be provided to enable a spouse to adapt to divorce. This is awarded for expenses such as training, education or rehabilitation to secure employment or temporary needs caused by the divorce. Reimbursement support is used to achieve a fair and just division of property when there are exceptional circumstances, such as financial misconduct by one spouse, or significant contributions made by one spouse for the education or career advancement of the other. Interim spousal support is sometimes granted to provide separate support for one spouse while legal proceedings are under way.

In Montana alimony influences property distribution, and it can become intricately involved in a divorce settlement. When spouses fail to reach an agreement, the Circuit Court can order support on a case-by-case basis.

In Montana, the court determines custody based on the best interests of the child. Custody can be joint legal, joint physical, sole legal, sole physical, or any combination. Courts encourage joint custody.

In any divorce case involving minor children, the court decides custody considering the wishes of the parents, the preference of the child if the child is old enough, the child's relationship with siblings and the family, the mental and physical health of the child, and the educational needs of the child. The Montana court encourages frequent and continuous contact between the child and both parents when it serves the best interests of the child.

Montana courts require all divorcing parents with minor children to complete a mandatory parenting class. Unless the court grants a waiver, both parents must complete this requirement.

In Montana, when the parties agree to share parental rights and responsibilities, the court makes an award absent substantial evidence to the contrary. In making an award, the court applies the best interests of the child standard. Montana law expresses a preference for parents to share as equally as practically possible in the custody of a child in a divorce case. When parents agree on custody arrangements, Montana requires that the agreement clearly define both legal and physical custody and include a parenting plan. Physical custody means where the child resides and with whom, and legal custody defines the right to make decisions regarding the child's upbringing, including childcare, education and medical needs.

In Montana, child support is based on the Melson Formula, which is a more complicated version of the Income Shares Model. The Melson formula incorporates several public policy judgments designed to ensure that each parent's basic needs are met in addition to the children's. The Melson Formula was developed by a Delaware Family Court judge and fully explained in Dalton v. Clanton, 559 A.2d 1197 (Del. 1989). Only three states -- Delaware, Hawaii and Montana -- use the Melson Formula.

Service of Process for a Montana Divorce

Service on the respondent can be accomplished a few different ways.

If the respondent does not want to be served directly and wants to eliminate the need for service, he or she may complete a Waiver and Answer. As part of this, the respondent is acknowledging that he or she has received a copy of the Petition and that the court has authority over the case.

The Answer can also be used to file the respondent's official response to the divorce petition. The respondent states whether he or she agrees with or disputes any of the petitioner's statements or allegations.