DO IT YOURSELF ONLINE DIVORCE IN MICHIGAN

3 Step Divorce has provided a helpful guide of information for filing for divorce in Michigan. Learn more about the residency requirements, service of process, child custody and more. Michigan is one of 17 states and the District of Columbia that permit only no-fault divorce.

Grounds for Divorce in Michigan

In Michigan, no-fault means "a [b]reakdown of the marriage relationship to the extent that the objects of matrimony have been destroyed and there remains no reasonable likelihood that the marriage can be preserved."

The complainant or defendant must reside in the state for 180 day prior to filing and in the county of filing for 10 days. You must meet this requirement before you are able to file for divorce, otherwise Michigan does not have jurisdiction of the case.

The divorce process in Michigan begins when the plaintiff files the Summons, Complaint for Divorce and other required divorce papers in the Circuit Court and pays the filing and judgment fees. They may choose a county in which either spouse resides. 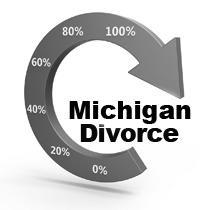 The county sheriff or another adult personally hands the paperwork to the defendant. This is what constitutes the divorce papers as being served. The papers may also be served by certified mail return recipient requested. The person serving the defendant completes a Proof of Service and returns it to the plaintiff for filing withe the court.

In some counties, the parties are required to file a Financial Affidavit, which lists each person's assets, income, expenditures and liabilities and may help determine which spouse gets child custody or pays child or spousal support. It also provides proof to the court that full financial disclosure of both the spouses took place prior to the divorce being finalized. Here is more information regarding the process of filing uncontested divorce papers in Michigan.

The judge can decide contested issues, but the case moves faster if the spouses work out such issues like child custody and support, marital property, and whether either spouse may seek alimony.

If the parties have children the case may be referred to a Friend of the Court (FOC), an evaluator or case worker who interviews the spouses and the children, relatives, teachers, or doctors and makes recommendations to the court regarding custody arrangements. This typically does not happen in an amicable situation.

After the filing, court observes a two-month waiting period for couples without children and a six-month waiting period for those with children. After that, the couples divorce may be finalized by the judge. If the spouses do not agree on everything, however, the divorce process will take much longer as well as being more expensive. Learn the best ways to save money when doing your own divorce in Michigan.

Do It Yourself Online Divorce in Michigan

Our online divorce makes it easy to file your own divorce in the state of Michigan. In as little as 20 minutes you can have all your completed divorce forms and filing instructions ready for signing and filing. Instantly access your completed divorce forms after a short online interview. It is that easy, no lengthy completion or delivery times. See if you qualify below:

Michigan courts support a fair and reasonable property division that the parties agree to, but if the parties cannot agree, the Circuit Court divides the marital estate guided by equitable distribution.

The court considers Worker's Compensation and Social Security Disability as part of the marital estate if it is received for injuries sustained during the marriage. Social Security is not a marital asset, but it may be considered in determining child support and spousal support. Stock Plans and Stock Options are marital assets if they are vested, as are pensions and other retirement accounts.

Professional Degrees or Licenses may be marital when the degree is earned through a family effort. The contributing spouse has a claim for compensation for sacrifices, efforts and contributions, but the claim is not for a share in the lifetime investment value of the degree.

The party requesting consideration of taxes must present evidence of what the taxes would be under certain property distribution scenarios.

The court may award either party the right to claim children of the marriage as a dependency exemption, but this is considered as part of the child support calculation, not the property settlement.

In dividing property, the court considers the parties' age and health, contributions to the marriage and economic circumstances and tax consequences.

In dividing property, the court generally does not consider marital misconduct.

When couples cannot agree on a fair and equitable solution, courts considers the amount of property and reasonable costs involved if assets must be sold, taxes and other costs reasonably anticipated by the spouses such as medical bills or needs of children, retirement plans, pensions, and a spouse's homemaker contributions.

In Michigan marital actions are a relevant factor in awarding spousal support, which is not part of the property settlement and considered separately, after the property division. The court awards alimony to either spouse.

Alimony, which supports the recipient spouse in becoming self-sufficient, also balances the incomes and needs of the former spouses so that neither person's standard of living is greatly affected differently than the other.

The settlement agreement may include a specified list of circumstances that would cause spousal support to end. These include remarriage (or sometimes cohabitation) of the recipient, death of either spouse, or a specific event, such as the economic advance of the recipient.

In Michigan, child custody is awarded to either parent based on the best interest of the child.

The Michigan court considers: the love of the family members, the child's wishes, the child's adjustment to home and community, history of the child's live in "a stable and supportive environment," "the parents' willingness to facilitate and encourage a close, meaningful, and continuing relationship between the child and the other parent"; "mental and physical health of the parties"; and "any history of domestic violence, child abuse, or negligence."

Michigan law expresses a preference for parents to share as equally as possible in the custody of a child, but an abusive parent will not receive sole or joint custody because the court presumes that the abusive parent is unfit unless he or she demonstrates otherwise.

Courts modify custody routines only when the party seeking modification can prove that it is in the best interest of the child.

Michigan uses the Income Shares model to determine child support. In this routine, a child receives the same proportion of parental income that he or she would have been received if the parents had not divorced because in an intact household, both parents pool their income and spend it for the benefit of all household members, including any children. Income Share is based on a principal in the Uniform Marriage and Divorce Act. It considers the gross income of both parents and then establishes the proportion each contributes and divides it among their minor children.

In Michigan, any competent adult over 18 and licensed in the state of Michigan and not a party to the action serves process, the divorce papers that are the summons and the petition for divorce. Usually, process is served by a friend or relative, the local sheriff's department, police department or a process server.

The server delivers the papers and completes the Proof of Service on the back of one copy of the summons and return it to the petitioner, or he or she can mail the papers registered or certified mail, with restricted service and return receipt requested. A party is considered personally served when he or she receives the summons personally.