DO IT YOURSELF ONLINE DIVORCE IN MASSACHUSETTS

Massachusetts offers a simplified divorce routine, by which the couples file as co-petitioners on ground that the marriage has faltered irretrievably but without either partner being at fault.

Grounds for Divorce in Massachusetts

Grounds for divorce in Massachusetts include no-fault, which mean an irretrievable breakdown of the marriage, or fault, which includes adultery, impotency, desertion for one year, drunkenness and drug use, and cruel and abusive treatment.

One of the spouses must live in Massachusetts if the grounds happened there. If the grounds for divorce happened elsewhere, one spouse must reside in the state for at least a year. If either party still resides in the county where the couple last lived together, the action is filed in the probate court of that county. If one of these requirements is not met, it typically means another court has proper jurisdiction over the divorce case.

In a joint petition (1A divorce), the couple asserts an irretrievable breakdown of the marriage, which means they cannot resolve their marital problems but neither spouse is to blame. Both spouses are the petitioners and are listed as petitioner A and petitioner B. A 1B divorce is also a no-fault divorce. The spouse who initiates the 1B divorce Petition is the plaintiff; the other spouse is the defendant. 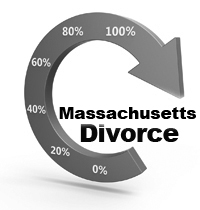 Both require a date when the marriage became irretrievably broken -- that is, when either spouse moved out or when one realized the marriage failed. This date is often an approximate date, as it can be difficult to put an exact date on when a marriage actually failed.

Also filed with the Petition are a completed Certification of Vital Statistics, and a certified copy of the Marriage Certificate.

Each spouse prepares a financial statement and exchanges it with the other. A party uses the short form if he or she earns less than $75,000. Otherwise, a long form must be completed. The parties should have an up-to-date financial statement prepared whenever they have a hearing. Here is more information regarding the process of filing uncontested divorce papers in Massachusetts.

A spouse who receives a Petition for Divorce in Massachusetts should file an appearance to show that he or she wants a voice in the case. He or she can also file a response, which is called an Answer, if the Petition contains incorrect statements or he or she want to ask for a result different that what the plaintiff requested. A defendant who wants to contest files a counterclaim to list different reasons for the divorce and pays a filing fee for the counterclaim.

Generally, after the couple signs a separate agreement, it takes two to six weeks after a court hearing. The divorce becomes final either three or four months after the court date. A contested divorce that goes to trial, however, takes as long as two years or more. Learn the best ways to save money when doing your own divorce in Massachusetts.

Do It Yourself Online Divorce in Massachusetts

The court accepts any fair and reasonable property division that the spouses agree upon through a written settlement agreement or clearly stated facts within the final Decree.

Massachusetts is an equitable division, all property ("kitchen sink") state. The courts have jurisdiction over all the property that both spouses have, marital and separate. Massachusetts recognizes prenuptial agreements, which set out the terms and conditions of a property settlement when the marriage fails. The courts uphold and divide property as the prenup dictates, even when the division is at variance from the state laws as long as the couple executed the agreement properly.

In dividing property, the court classifies assets and liabilities as marital or separate, then places a value on assets and debts, and then makes an assignment. In dividing property, the court considers the length of the marriage; the conduct of the parties during the marriage; the age, health, station, occupation, amount and sources of income, vocational skills, employability; estate, liabilities and needs of each of the parties, and "the opportunity of each for future acquisition of capital assets and income."

Once handed down, a Massachusetts property division order cannot be modified unless there are "exceptional and compelling" circumstances for the sake of "fairness and justice."

Alimony and Spousal Support in Massachusetts

In determining alimony, the judge considers the financial position of each spouse, particularly the age, employment, other assets offered to the requesting spouse in the divorce, whether or not that spouse supports children as the custodial parent, the length of the marriage and the behavior of each spouse during the marriage.

Alimony varies from case to case. In Massachusetts, courts may order temporary alimony, (alimony pendente lite), granted during the divorce proceedings granted at the discretion of the court during the divorce proceedings before the final decree; short-term alimony rehabilitative, granted to allow the receiving party time to gain necessary skills; and long-term alimony, usually reserved for lengthy marriages.

In Massachusetts, health coverage available at a reasonable cost may be extended to cover the alimony recipient because a divorcing spouse must cover the former spouse if he or she can do so.

When parents disagree about custody, the court decides custody of the child.

Child Support Guidelines are provided in the Massachusetts Court Rules and promulgated by the Supreme Judicial Court. The Massachusetts guidelines are a hybrid form of the Percentage of Income model and Income Shares Model. Support is calculated on the gross income of the non-custodial parent, but then offset by a percentage of income of the custodial parent over a certain amount. Support for education of the child is through age 21.

Massachusetts Service of Process for Divorce

The divorce papers, the summons and the Petition, are served together.

Personal service outside of Massachusetts may be effected by delivering the divorce papers in a manner appropriate for personal service within the Commonwealth.

If a person does not know where his or her spouse lives, the plaintiff must file a motion for alternate service and then, with court approval, publish a legal notice of the impending action once a week for three weeks notice.