DO IT YOURSELF ONLINE DIVORCE IN MARYLAND

Grounds for Filing for a Maryland Divorce

No-fault: Mutual Consent when there are no minor children and the couples sign a Marital Settlement Agreement.

These fault based grounds must be proved in court through evidence and testimony for the court to grant a divorce in Maryland.

Residency Rules For a Maryland Divorce

To file for a divorce in Maryland, a couple must be married or living in the state for at least one year, or two years depending on the grounds to file for divorce.

The plaintiff files the divorce papers in the Circuit Court of his or her county of residence.

Once the forms are completed, the court clerk issues a Writ of Summons along with a copy of the Complaint. The Complaint and the Summons must then be served on the defendant spouse.

The defendant may be served the Complaint and the Writ of Summons in a number of different ways. Once service is completed, the plaintiff should receive proof of service from the server, be it the sheriff, a private process server, a third party or the U.S. Postal Service's receipt. This proof, which is in the form of an Affidavit, shows that the defendant was properly served. Learn the best ways to save money when doing your own divorce in Maryland. 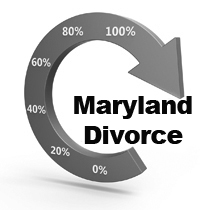 Both spouses complete Financial Statements, which include information about each party's individual assets, liabilities, income and expenses as well as any joint property and debts. If either side requests child support, the court relies on the information in these statements to make an order. Therefore it is very important that the financial information be as accurate as possible.

The Answer depends on the jurisdiction, and whether the spouses are in agreement. An uncontested divorce in Maryland can be completed in as little as thirty days, and a fully litigated case can take more than a year. Similarly, mediation may take several sessions, over months or years depending on the complexity of the case and how much the spouses' positions vary.

Do It Yourself Online Divorce in Maryland

Our online divorce makes it easy to file your own divorce in the state of Maryland. In as little as 20 minutes you can have all your completed divorce forms and filing instructions ready for signing and filing. Instantly access your completed divorce forms after a short online interview. It is that easy, no lengthy completion or delivery times. See if you qualify below:

Unless the couple can reach a settlement, the court divides the marital property -- pension, retirement, profit sharing or deferred-compensation plans. Maryland requires equitable distribution of property in a divorce. The court determines a fair award of assets and debt. Equitable does not mean equal, but rather fair. The court considers contributions of each spouse, the well being of the family, property values, the economic circumstances of each spouse as well as current situations such as age, mental state, the duration of the marriage, and the interest each spouse has in the property.

In the financial disclosure, spouses share the same information -- income from all sources, all expenses, a list of all assets and a list of all debts. The listed items should include property owned jointly with the spouse and all separate property.

When dividing property, the Maryland court classifies the parties' assets as marital or non-marital.

After the court classifies assets as marital or non-marital (separate), it considers the contribution of each partner to accumulation of marital property; any dissipation of marital property, if any; both the market value and the sentimental value of the property to be divided; the value of each spouse's separate property; any tax or other economic consequences of the property division; the extent to which an award of property may eliminate the need for alimony; and each spouses overall need for financial security. Property brought into the marriage or inherited may not be subject to equitable distribution.

How Alimony Works in Maryland

The court awards alimony on a case-by-case basis and decides the amount and duration of spousal support, based on what it considers a fair and equitable award for both parties. Either party to a divorce may seek alimony, and Maryland courts may consider fault in awarding alimony.

Alimony influences the distribution of property, and it can become intricately involved in a divorce settlement. So if one spouse is awarded alimony, this may offset his or her share of the marital property.

The court considers the parties financial needs and other relevant factors in awarding alimony. Alimony terminates upon the death of either party, upon the remarriage of the recipient, or due to change of circumstances.

Custody and Visitation Time in Maryland

In Maryland the court awards joint custody or sole custody. The court denies custody to a party if it believes that the party abused or neglected the child and further abuse seems likely.

In Maryland, when the parties agree to shared parental rights and responsibilities, the court makes an award absent substantial evidence to the contrary. Like all jurisdictions, the court applies the best interests of the child standard. The court may not show preference for one parent because of either parent's gender or the child's age and gender. The court may grant grandparent or third-party visitation.

When a couple seeking divorce has minor children, the court can order an investigation by a third party to gather information about the circumstances of the divorce, the parents and the children. This report goes to the court no later than three days before the hearing. Interested parties can request the testimony of the investigator. The couple incurs costs of all or part of the investigation if for any other reason than suspected abuse or neglect.

In Maryland, child support guidelines are statutory. Child support is based on the Income Shares Model and is based on gross income of the parents. Therefore the monthly support amount for the child is proportionally shared between the two parents. One parent pays the other parent his or her share of child support.

In the Income Shares model, a child receives the same proportion of parental income that he or she would have been received if the parents had not divorced because in an intact household, both parents pool their income and spend it for the benefit of all household members, including any children. Income Share considers the gross income of both parents and then establishes the proportion each contributes and divides it among their minor children. Considerations will also be made for existing debt, property settlement, mortgages, other children or any other financial considerations.

The plaintiff/petitioner serves his or her spouse the divorce papers promptly after filing. The divorce papers are the summons and the complaint, and they are delivered together, but they are not served on Sundays. Service of process can be done in several ways, including first class and certified mail or delivery by the sheriff for fee. The defendant may also waive the service, and simply accept the summons. If the location of the spouse cannot be found after a reasonable search, the plaintiff/petitioner may file for divorce by publishing notice in the newspaper instead.