DO IT YOURSELF ONLINE DIVORCE IN LOUISIANA

Over the last five years it has become more and more popular to file for divorce yourself in the state of Louisiana. When your divorce is uncontested, the court filing procedure becomes simplified to the extent that as as long as you file the correct divorce papers in the proper order the divorce is typically granted within 90 day of the day of filing.

Grounds for Divorce in Louisiana

The No-Fault ground may be used when the spouses live separate and apart continuously for at least 180 days prior to the filing. This the ground that is most commonly used for those spouses who file for their own uncontested divorce.

The filing spouse must reside in Louisiana for at least a year when filing and must file for divorce in the district court of the parish where he or she resides.

Except in the case of a covenant marriage, the court grants a divorce upon motion when either spouse files a Petition for Divorce and proves that 180 days have elapsed from the service of the Petition.

Once the Louisiana divorce forms are completed, the petitioner/plaintiff files for divorce in the district courthouse. The court clerk provides information about fee waivers for an indigent party. The clerk time and date stamps the divorce papers after verifying the information. 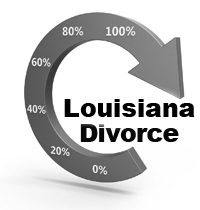 The plaintiff/petitioner serves his or her spouse the divorce papers, which is also called service of process. Both spouses file a financial affidavit, which provides the court and the other spouse essential information about finances and is used both in settlement negotiations and guides the court should the case require a hearing or trial regarding financial issues. Many people file for an uncontested divorce and thus save time and money because they settle when both agree on the terms and conditions of the divorce. Here is more information regarding the process of filing uncontested divorce papers in Louisiana.

If it seems impossible to come to an agreement with the spouse over these issues, a party may use a court-appointed mediator to help. Mediators can help people negotiate emotionally charged issues.

When the spouses cannot agree they head toward a contested divorce. If issues are still disputed after negotiating, the parties go to a divorce trial. Once the trial is finished and the judge issues an official divorce judgment, the court may issue a divorce as soon as the separate and apart requirements are fulfilled.

The Louisiana divorce process requires spouses to live "separate and apart" for a designated amount of time before a divorce is final. If there are no children, this requirement will be 180 days. Couples with children in most cases need to wait one year for their divorce decree to be finalized unless there has been spousal abuse.

The district court can enter a judgment of divorce 180 days after the petition was filed in a no-fault divorce. In a fault divorce, the district court cannot enter a final judgment of divorce until one year after the petition was filed. A divorce may also be granted if one spouse is a felon serving a life sentence in prison. Learn the best ways to save money when doing your own divorce in Louisiana.

Do It Yourself Online Divorce in Louisiana

Our online divorce makes it easy to file your own divorce in the state of Louisiana. In as little as 20 minutes you can have all your completed divorce forms and filing instructions ready for signing and filing. Instantly access your completed divorce forms after a short online interview. It is that easy, no lengthy completion or delivery times. See if you qualify below:

Divorce has tax consequences, so the parties must consider filing status, dependents and other deductions in the decree.

In the financial disclosure, the same information is generally required of each spouse-- income from all sources, all expenses, a list of all assets and a list of all debts. The listed items should include everything owned jointly with the spouse. It should also indicate all separate property. Financial information is filed with the court and exchanged between spouses.

Community property is divided equally between the spouses. If an asset cannot be divided, such as a house, the court awards other property or cash in compensation. The court can divide property unequally if it finds a valid reason. For example, Louisiana divorce laws allow a spouse to be reimbursed for the cost of the other spouse's education expenses during the marriage. In this instance the court could legally award more marital property to one spouse as a means of reimbursement. If the court deviates from an equal division, however, it must explain why in its final judgment of divorce.

The court may include the retirement benefits and plans earned by both spouses as marital assets available for division. Retirement plans are either Defined Contribution Plans (DC), such as a 401(k), or Defined Benefit Plans (DB), which is the company pension. That part of a pension accumulated during a marriage is community property and subject to distribution. When spouses share in each other’s pension plan, a Qualified Domestic Relations Order (QDRO) must be prepared. The QDRO spells out the terms and conditions of the pension distribution.

Louisiana permits both fault and no-fault divorce. In a fault divorce, the court identifies one spouse as responsible for the demise of the marriage, but the court makes no such determination in a no-fault divorce. The distinction of the type of divorce is important because in Louisiana only a spouse not at fault can receive alimony.

Louisiana permits alimony to a party who is not at fault for the breakup of the marriage and who proves a need for financial support, but the court does not award alimony if the other spouse cannot pay. A request for alimony can be made in the petition for divorce or by a separate motion before the court enters the final judgment of divorce. The state allows temporary and permanent alimony.

In Louisiana, child support guidelines are statutory. They are based on the Income Shares Model and are based on gross income of the parents.

Service of Process for Louisiana Divorce

The plaintiff/petitioner serves his or her spouse the divorce papers, promptly after filing. Service of process can be done in several ways; moreover, the defendant/respondent may also waive the service, and simply accept the summons. If the location of the spouse cannot be found after a reasonable search, the plaintiff/petitioner may file for divorce by publishing notice in the newspaper instead.