DO IT YOURSELF ONLINE DIVORCE IN KENTUCKY

Filing for your own divorce in Kentucky is very common. In cases where both spouses agree and are willing to sign the paperwork, the divorce process in Kentucky can be done quickly without any great expense. When the spouses are in agreement it helps facilitate a smoother divorce process as well as decrease court and legal expenses.

Kentucky Residency Rules for a Divorce

The filing spouse must live in the state, or be an active member of the military stationed in the state, for at least 180 days before he or she can file for divorce.

Only credible witnesses can prove residency.

The petitioner files the Summons and Petition for Divorce, the Case Data Information Sheet, and the Certificate of Divorce to start a divorce.

Filing the divorce papers with the clerk of the court starts the action, and a 60-day waiting period begins.

Kentucky divorce law states that the filing party must meet certain conditions before a Court can legally dissolve his or her marriage. The court decides when a marriage is irrevocably broken if the spouses do not agree. 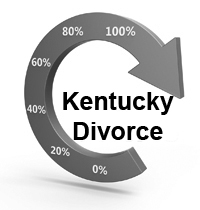 Living apart may include living under the same roof without sexual cohabitation. The clerk time and date stamps the originals and creates a file on the action. After that, the petitioner serves his or her spouse with a set of the signed, stamped photocopies as soon as possible. Under certain cases service can be waived by the respondent.

After filing, the petitioner serves the respondent within 45 days after filing. If he or she does not serve the papers within 45 days, the clerk of court dismisses the filing automatically and he or she must start over.

Both spouses make a Preliminary Case Disclosure, which details each spouse's financial picture, from employment and assets, to liabilities and monthly expenses.

In an uncontested divorce, the spouses complete a number of forms after they reach an agreement on all issues. These documents tell the court about the agreement and ask the court to schedule a final hearing after 60 days have passed.

In contested actions, the court may require both spouses to attend a divorce education course, such as Families in Transition.

The county clerk's office can tell a party if the court has this requirement, as it varies from county to county.

When the respondent does not file a response, the petitioner can finalize a divorce by asking for a default judgment even when the parties have not been able to reach an agreement. A default judgment requires a Motion for Default Judgment, Decree of Dissolution of Marriage and a Deposition of Petitioner. Here is more information regarding the process of filing uncontested divorce papers in Kentucky.

The courts may approve a request for a legal separation rather than a divorce when both parties agree.

Verified Divorce Petitions in Kentucky must explicitly state: the name, birthdate, social security number and address of each party and their minor children; the date and place the marriage commenced and the date the parties separated, the plans for custody, visitation, child support, and alimony, and the relief the filing party seeks.

Once the spouses have waited 60 days, their divorce can become final. The waiting period starts on the service date of the petition. However, until it expires, a court can issue a temporary order for pressing matters. A full waiting period may not be necessary if an attorney representing a defendant/respondent files an entry of appearance. Learn the best ways to save money when doing your own divorce in Kentucky.

Do It Yourself Online Divorce in Kentucky

Kentucky is an equitable distribution state.

In dividing property, the courts consider what property each spouse has contributed to the marriage and its value, how long the marriage lasted, how the divorce affects the finances of each party, and whether the domiciliary parent should have rights to the couple's home.

After the Circuit Court classifies property during discovery as either marital or separate, it assigns a monetary value on the marital property and debt. Finally, it distributes the marital assets between the two parties in an equitable fashion. Equitable does not mean equal, but rather what is deemed by the Circuit Court to be fair.

Alimony and Spousal Support in Kentucky

Either spouse may receive alimony when he or she lacks the property to provide for his or her own needs, and is unable to find appropriate employment, or is unable to work because of obligations to care for children or others in his or her custody. As is the case in other jurisdictions, alimony influences the distribution of property, and it can become intricately involved in a divorce settlement. When spouses are unable to reach an agreement on this issue, the Circuit Court can order support on a case-by-case basis.

Alimony may be temporary, granted at the discretion of the court during the divorce proceedings and before the final decree; short- term granted to allow the receiving party time to gain necessary skills or employment or long-term, granted to a spouse who has significant needs, and is usually reserved for lengthy marriages.

In Kentucky courts award child custody "in accordance with the best interests of the child" and "equal consideration shall be given to each parent and to any de facto custodian."

Joint custody is an option. Grandparents' visitation rights are recognized. The child's wishes are considered. The judge may order the spouses to take a parenting class, such as Children in Between, which can be taken online. Kentucky's best interest test means the court evaluates any child custody case in light of what is best for the child. Judges are not bound by what the parties may wish or desire. Courts encourage divorcing or separating parents to work together in raising their children. Parents write a parenting plan detailing their divorced parenting.

In the event that divorcing parents fail to agree, the court intervenes to resolve the issues of child custody, support, and visitation rights.

Kentucky offers three basic custody routines: single parent custody, joint custody, and a de facto custody, which is when someone other than a child's biological parents, receives custody of a child. Kentucky favors joint custody, which means both spouses make decisions regarding the child's education, medical treatments, religious upbringing and similar decisions, as equals. The court may also award sole custody, where one parent makes such decisions. However, joint or sole custody can be granted independently of physical custody. Physical custody determines where the child lives. In this routine, the court appoints one parent as the custodial parent, while the other will be granted visitation rights.

In Kentucky, child support guidelines are set out by statute. The guidelines are based on the income shares model, based on gross income. Support may include sums necessary for a child's education, including post-majority education.

In the Income Shares routine, a child receives the same proportion of parental income that he or she would have been received if the parents had not divorced because in an intact household, both parents pool their income and spend it for the benefit of all household members, including any children. Income Share considers the gross income of both parents and then establishes the proportion each contributes and divides it among their minor children.

Service in Kentucky may be made upon any party who is located out of state either by certified mail, or by personal delivery of a copy of the summons and of the complaint by a person over 18.

The divorce papers --the summons and complaint-- are served together. They include the name of the court and the style and number of the action, notifying the respondent that a legal action has been filed against him or her and that unless a written defense is made within 20 days by the party, or by an attorney on his or her behalf, a judgment may be issued for the relief demanded.

Servers deliver the divorce papers to respondent personally or, if he or she refuses to accept them, by offering personal delivery to such person, or by delivering the papers to an agent authorized by appointment or by law to receive service of process for such an individual.

If a spouse cannot be located, service must be performed through publication by publishing a legal notice in the newspaper. This process tends to take a bit longer and has additional costs associated with it.