DO IT YOURSELF ONLINE DIVORCE IN KANSAS

Kansas offers no-fault divorce as well as a divorce on general grounds.

In Kansas, no-fault means incompatibility; the spouses do not get along. General (fault) grounds include "failure to perform a material marital duty or obligation; or mental illness or mental incapacity."

The complainant or defendant (including a party stationed on a military post) must reside in the state for 60 days prior to filing and in the county of filing for 10 days. This requirement must be met for the court to have jurisdiction over the divorce case.

The action begins when the plaintiff files the Summons and Petition and other related divorce papers in the District court where either spouse lives. They initiate the filling process by paying the appropriate court fees. 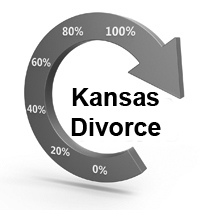 The petitioner serves the respondent in one of three ways: voluntary entry of appearance, sheriff's service, or certified mail. The spouses file a Domestic Relations Affidavit, which profiles each person's assets and liabilities and may help determine which spouse gets child custody or pay child or spousal support. The Domestic Relations Affidavit also proves to the court that each spouse has disclosed financial information to one another prior to the divorce becoming final through the court. Here is more information regarding the process of filing uncontested divorce papers in Kansas.

The judge can decide contested issues if needed, but the case moves faster if the spouses resolve such issues as child custody and support, marital property and alimony. In an uncontested divorce case, the judge will just confirm that the mutually agreed upon decisions regarding the children are in fact in the best interest of the children. Judges prefer cases to be uncontested because they realize that the divorcing spouses know their situation better than they possibly could.

Parties must wait 60 days after the filing of the petition, unless an emergency exists before the divorce in Kansas can be made final. best ways to save money when doing your own divorce in Kansas

Do It Yourself Online Divorce in Kansas

Kansas courts support a fair and reasonable property division that the parties agree to, but if the parties cannot agree, the Circuit Court divides the marital estate guided by equitable distribution.

The court considers Worker's Compensation and Social Security Disability in the marital estate if it is received for injuries sustained during the marriage. Social Security is not a marital asset, but it may be considered in determining child support and spousal support. Stock plans and stock options are marital assets if they are vested, as are pensions and other retirement accounts.

Professional degrees or licenses may be considered a marital asset when one spouse has contributed to the effort of the other in gaining the degree or license. The contributing spouse has a claim for compensation for sacrifices, efforts and contributions, but the claim is not for a share in the lifetime investment value of the degree. These circumstances vary and are determined on a case-by-case basis.

Courts also consider the tax consequences of stock options and the value of accumulated vacation and leave days when determining the property award. The tax consequences play a huge role and the party requesting consideration of taxes must present evidence of what the taxes consequences would be under certain property distribution scenarios. A Divorce Financial Planner is often hired to help with this part of the divorce case.

The court may award either party the right to claim children of the marriage as a dependency exemption, but this is considered as part of the child support calculation, not the property settlement. Sometimes spouses even agree to rotate claiming the dependency of children by alternating years.

In dividing property, the court examines and considers several factors, but the main ones are the parties' age and health, contributions to the marriage and economic circumstances and tax consequences.

In dividing property, the court does not consider marital misconduct.

In Kansas the fault of a spouse -- basis for the breakdown of the marriage -- is a relevant factor in awarding spousal support, which is not part of the property settlement and considered separately, after the property division. The court awards alimony to either spouse.

Alimony, which supports the recipient spouse in becoming self-sufficient, also balances the incomes and needs of the former spouses so that neither person's standard of living is greatly affected.

The settlement agreement may include a specified list of circumstances that would cause spousal support to end. These include remarriage (or sometimes cohabitation) of the recipient, death of either spouse, or a specific event, such as the economic advance of the recipient.

Like all the jurisdictions, courts resolve disputed child custody based on the best interests of the child. The court will make all decision based on what is best for the child.

Family dynamics, the child's adjustment and wishes, parent and child interaction and parental roles and "the history of domestic violence, child abuse, or spousal abuse, if any" - all are among the considerations entertained by the court deciding whether joint custody or sole custody is suitable.

Very often parents share joint legal custody, with one parent having physical custody and the other parent receiving visitation. The child maintains a permanent residence in just one household. By comparison, in sole custody, the parent with sole custody makes all decisions regarding the child's upbringing and the child lives with that parent. In many cases with a sole custody routine, the non-custodial parent has scheduled visitation with the child. As a general rule, a parent receives sole custody when the other parent is mentally, physically or emotionally unable to care for the child.

Divorcing parents with minor children may be required to complete a parenting class unless the court waives this requirement. The parenting class, if required, must be completed by both parents prior to the divorce being granted. A certificate of completion is provided and submitted to the court to fulfill this obligation.

Courts enjoy wide latitude in determining visitation. The court may order supervised visitation when the court has reservations about the child's safety with one parent. There are often standard visitation schedules that the court will implement, which involve a consistent weekend rotation (with overnights depending the the child's age) as well as holidays.

Kansas uses the Income Shares model to determine child support. With this model, the child receives the same proportion of parental income that he or she would have been received if the parents had not divorced because in an intact household, both parents pool their income and spend it for the benefit of all household members, including any children. Income Shares, which is based on a principal in the Uniform Marriage and Divorce Act, considers the gross income of both parents and then establishes the proportion each contributes and divides it among their minor children.

Sometimes, after calculating support, courts permit adjustments up or down that are called deviation factors. Courts may consider extraordinary expenses, independent income, seasonal fluctuation in parents' income, special needs as well "any other reason that should be considered to make child support more equitable." Likewise, extraordinary expenses can be either add-ons, where the expense is added to the support payment paid by the noncustodial parent, or a deduction, where it is subtracted. Courts can decide support guidelines are unjust based on any "relevant factor."

Kansas Service of Process for Divorce

Process servers in Kansas are not licensed, may be a sheriff or his or her deputy, an attorney admitted to the practice before the Kansas Supreme Court of Kansas or a person appointed by a judge or clerk of the district court.

Personal service means delivering, or offering to deliver, divorce papers to the recipient. Residence service means leaving the papers at the dwelling or usual abode of the person to be served with a mature person who lives there.

When service cannot be made upon an individual, service may be made by leaving the papers at the defendant's dwelling or usual place of abode and mailing a notice that such copy has been left at such house or place of abode to the individual by first-class mail.

In a divorce case, service may by publication if the respondent resides out of the state or if the party, with due diligence, is unable to make service upon the defendant in the state.

A notice is published once a week for three consecutive weeks in a newspaper in the filing county and one authorized by law to publish legal notices.