DO IT YOURSELF ONLINE DIVORCE IN INDIANA

Grounds for Divorce in Indiana

Residency Rules for Filing a Divorce in Indiana

Filing for a Divorce in Indiana 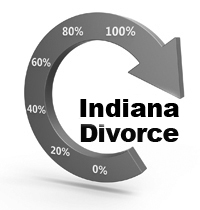 The petitioner typically files the divorce paperwork with the clerk of court's office in his or her county. Any documents containing confidential information -- social security numbers, bank account numbers, tax records, PIN numbers, medical records, and child abuse records - must be on light green paper. This information can also be redacted from the documents and provided on an additional Confidential Statement.

After filing, the petitioner serves the respondent with copies of the divorce paperwork, and the respondent may file an answer, counterclaim, or both. After service, the spouses can try to work out an agreement. Between the initial filing and the final hearing, both sides exchange financial information, including a list of all income, assets, and debts.

An uncontested divorce in Indiana is generally much less expensive than litigation. Spouses who reach agreement file a settlement agreement with the court which speeds up the process. The agreement addresses all the items in the divorce petition. If there are children, the spouses must also file a parenting plan that designates the custodial parent and the visitation arrangement. Here is more information regarding the process of filing uncontested divorce papers in Indiana.

Whether or not the spouses reach agreement or go forward with contested divorce and trial, Indiana imposes a 60-day waiting period before a court grants a final decree ending the marriage, but it can take longer depending on the issues and the court's schedule. Learn the best ways to save money when doing your own divorce in Indiana.

Do It Yourself Divorce in Indiana Made Easy

In Indiana, the courts generally accept a fair and reasonable property division the parties agree to, but if the parties cannot agree, the Domestic Relations Court divides the marital estate within the Judgment of Divorce.

The court presumes that equal division of marital property between the spouses is "just and reasonable." In Indiana a spouse may rebut the presumption of an equal distribution if he or she presents relevant evidence that an equal division would not be just and reasonable. The spouses must have a valid pre-nuptial agreement prior to their marriage in order to keep property separate. However, courts may award one spouse more of the marital estate, depending on the contribution each spouse made to the property's acquisition.

An equitable distribution state, Indiana uses the "all property" regime, and appreciation of separate property is marital. Equitable does not mean equal, or even half, but rather what the Domestic Relations Court considers fair. If the Court finds one party dissipated marital assets, such as gambling, it may consider an equal division of property would be inappropriate.

According to statute, the length of marriage does not have an effect on property distribution. However, in a relatively short-term marriage, the Court would probably deviate from the 50/50 presumption to allow parties to keep what each brought into the marriage.

Being an all property state, marital property is property owned or acquired by either spouse before or during the marriage or assets acquired by their joint efforts. Often the Court deviates from the 50/50 presumption in order to give a spouse his or her separate property.

The Domestic Relations Court assigns a monetary value on the marital property and debt, and then distributes the marital assets between the two parties in an equitable fashion.

Courts generally accept the value when the spouses mutually agree on a value of a particular asset. Several different methods of valuation are used in determining how much a marital asset is worth, depending upon the asset to be valued and the level of agreement between the parties. Experts may be retained by the parties or by the courts to determine values if the parties cannot agree.

Couples choose one of three options to divide the equity in the family house. As in other jurisdictions, divorcing couples normally sell the marital home and divide the profits, or sell the home to one party and refinance, or the custodial parent occupies the house until the last child leaves school and then sell it. However, the court may be inclined to award the family home to the spouse with primary physical custody of children.

Retirement benefits are marital property when the worker meets all the requirements for payout. This is called vested. In Indiana, vested pensions are marital property. A pension vests when all the requirements to receive the pension have been met. Unvested pensions are also marital property. Plans come in many varieties, but they are either Defined Contribution Plans (DC), such as a 401(k), or Defined Benefit Plans (DB), which is the company pension. That part of a pension accumulated during a marriage is community property and subject to distribution. When spouses share in each other's pension plan, a Qualified Domestic Relations Order (QDRO) must be prepared. The QDRO spells out the terms and conditions of the pension distribution. The instructions set forth the terms and conditions of the distribution - how much of the benefits are to be paid to each party, when such benefits can be paid, how such benefits should be paid, etc.

When the court decides that one spouse needs financial support from the other, it grants a request for maintenance. This provides the petitioning spouse with basic living expenses in order to maintain the lifestyle enjoyed during the marriage. In doing this, the court considers if the spouse seeking maintenance lacks sufficient property to provide for his or her basic living expenses and/or is unable find a suitable job.

The amount and duration of alimony depends upon the finances of the petitioning spouse, the time he or she needs for education and training to become self-supporting, the duration of the marriage and the quality of life enjoyed during the marriage, the age and the physical abilities of the petitioner, the ability of the payor to meet their own needs while meeting those of the other spouse.

As in all jurisdictions, the best interest of the child determines contested child custody.

The gender of the parent is not a factor in deciding custody; there is no maternal preference.

In Indiana, joint custody may be awarded if it is in the child's best interests. The relevant factors for determining custody are the parents' and child's wishes, the interaction and relationship of the child with any person who may significantly affect his or her best interests; the mental and physical health of all individuals involved, and a pattern of domestic violence.

Indiana courts strive for parents to share as equally as possible in the custody of a child. In many, if not most, situations, joint custody is preferred since both parents share the rights and responsibilities of raising the child. Joint custody encourages parental cooperation in childrearing

The court considers certain relevant factors before awarding custody, including the child's wishes or preferences; the child's adjustment to his or her home, school, and community; the child's rapport with his or her parents and siblings; the stability in life and continuity of interaction with his or her parents; the parents' wishes or preferences; the parents' mental and physical health and moral character; the history of domestic violence or child abuse by either parent; and parental disability

Sometimes a third party, such as grandparents, may be awarded custody when the court determines that both parents are detrimental to the best interests of the child.

In Indiana, both parents contribute to the support of their child. The parent with greater earning power typically pays child support if he or she is not the custodial parent. In deciding child support, the court considers the financial resources of the parent who has primary physical custody of the child. The court attempts to ensure that the child enjoys the same standard of living he or she would have had if the parents had not divorced. Other factors the court considers are special physical, mental or educational needs. The court also considers the resources and needs of the noncustodial parent.

Child support guidelines are set out in the Indiana Rules of Court. The guidelines are based on the income shares model, based on gross income. Support may include sums necessary for a child's education, including post-majority education. Both parents provide financial support for all of their minor children. Support is based on the Indiana Child Support Guidelines, which helps the court figure out how much a parent should pay. Indiana statute includes child support guidelines that provide a formula for determining the amount each parent should contribute to the child's welfare based on their combined weekly, adjusted income. In Indiana's Income Shares model both parents pool their income and spend it for the benefit of all household members, including any children. It considers the gross income of both parents and then establishes the proportion each contributes and divides it among their minor children.

Sometimes, after calculating support, courts permit adjustments up or down that are called deviation factors. Courts may consider extraordinary expenses, independent income, and seasonal fluctuation in income. A parent may always request that a child support order be modified.

Service of Process to Start and Indiana Divorce

The filing spouse serves the divorce papers on the receiving spouse. This means copies of the divorce papers filed in the Clerk's Office. Indiana law permits service via certified mail, private process server, or sheriff's service. Personal service is the preferred method of service, which requires that the papers be delivered in person. Most people hire a professional process. After delivery of the documents, the process server returns an Affidavit of Service, which lists the name and address of the person served, as well as the address where the documents were handed over. The plaintiff must file this with the court to prove the divorce papers were properly served.

When the spouse is missing, the law permits service by publishing notification of the divorce complaint in a local newspaper.