DO IT YOURSELF ONLINE DIVORCE IN ILLINOIS

3 Step Divorce has provided a helpful guide of information for filing for divorce in Illinois. Learn more about the residency requirements, service of process, child custody and more. Here are the key elements of a dissolution of marriage in Illinois:

Grounds for Divorce in Illinois

No-Fault: For spouses who live separate and apart in excess of two years, with irreconcilable differences causing an irretrievable breakdown. The living separate and apart for a two-year continuous period may be waived by written stipulation of both spouses.

Either spouse must reside in Illinois for 90 days. The plaintiff may file in the county where either spouse lives.

The plaintiff or petitioner begins the action by filing the Petition for Dissolution of Marriage (the complaint) in the county court and paying the filing fee. The clerk keeps one set and returns the other to the plaintiff who arranges for the paperwork to be served on the defendant. 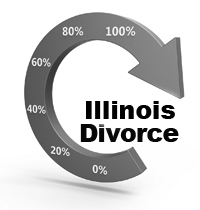 Illinois does not have standard domestic relations forms. In Cook county, which includes Chicago, petitioner must file four copies of the Petition and four copies of the Summons, a Domestic Relations Cover Sheet, Affidavit of Service and a Certificate or Dissolution. If the parties have children, the petitioner must also file additional papers, including a Joint Parenting Agreement and Visitation Form. Here is more information regarding the process of filing uncontested divorce papers in Illinois.

An indigent plaintiff may avoid fees by filing a In Forma Pauperis petition. It is not automatic, but rather the court will decide whether or not the filing fees should be waived.

Private process server, sheriff's service, or publication must serve the divorce papers. The defendant signs an Acceptance of Service form that is filed with the clerk.

Many counties now require both spouses to file a Financial Disclosure Statement, which makes property division easier and shows the court that full financials have been share by both parties.

For an uncontested divorce, the spouses live apart for six months and assert that irreconcilable differences have caused an irretrievable breakdown and they agree to waive the two-year waiting period. Learn the best ways to save money when doing your own divorce in Illinois.

Do It Yourself Online Divorce in Illinois Made Easy

Our online divorce makes it easy to file your own divorce in the state of Illinois. In as little as 20 minutes you can have all your completed divorce forms and filing instructions ready for signing and filing. Instantly access your completed divorce forms after a short online interview. It is that easy, no lengthy completion or delivery times. See if you qualify below:

Property Division for an Illinois Divorce

Illinois is an equitable distribution, dual-classification state. The appreciation of separate property is separate. The court accepts any fair and reasonable property division that the spouses reach.

In dividing property, the court generally does not consider marital misconduct, but economic misconduct - hiding assets in support of a girlfriend, for example - may result in off setting compensation to the victim spouse.

When couples can agree on a fair and equitable solution, courts considers many factors, including "the relevant economic circumstances of each spouse when the division of property becomes effective, including the desirability of awarding the family home, or the right to live therein for reasonable periods, to the spouse having custody of the children"; "the contribution of each party in the acquisition, preservation or appreciation in the value of marital or nonmarital property, including the contribution of a party as homemaker"; and "the custodial provision for any dependent minor children."

All marital property is divided equitably unless the spouses agree otherwise. Normally, the court values assets and liabilities at the time they are divided but the court may select any valuation date.

Illinois, like most states, does not consider advanced degrees marital property.

As in other jurisdictions, divorcing couples normally sell the marital home and divide the profits, or sell the home to one party and refinance, or the custodial parent occupies the house until the last child leaves school and then sell it. When dealing with a marital home, there are many options.

Retirement benefits are marital property when the worker meets all the requirements for payout. This is called vested. They are either Defined Contribution Plans (DC), such as a 401(k), or Defined Benefit Plans (DB), which is the company pension. That part of a pension accumulated during a marriage is marital property and subject to distribution. When spouses share in each other's pension plan, a Qualified Domestic Relations Order (QDRO) must be prepared. The QDRO spells out the terms and conditions of the pension distribution.

Alimony for an Illinois Divorce

The court awards alimony only when it is necessary; it is discretionary. The court considers 17 relevant factors, including "the present and future earning capacity of each party"; "the standard of living established during the marriage"; and "contributions and services by the party seeking alimony to the education, training, career or career potential, or license of the other spouse."

Alimony may be ordered for a limited period of time or a longer period of time "depending on the circumstances and the interest of justice." The court may change alimony based on a change in circumstances, such as sudden increase or decrease in either party's income.

In Illinois, the primary concern in custody is the best interest of the child and that can mean joint or sole custody.

Courts permit a variety of custody regimes, but must consider all relevant factors in determining whether joint custody is workable.

Illinois uses the Income Shares model to determine child support. In this routine, a child receives the same proportion of parental income that he or she would have been receiving if the parents had not divorced because in an intact household, both parents pool their income and spend it for the benefit of all household members, including any children. Income Shares, which is based on a principal in the Uniform Marriage and Divorce Act, considers the gross income of both parents and then establishes the proportion each contributes and divides it among their minor children.

A party is considered personally served when he or she receives the summons personally.

After service, the process server completes an Affidavit of Service.