DO IT YOURSELF ONLINE DIVORCE IN GEORGIA

Divorcing spouses have the right to a jury trial in Georgia. The judge or a jury decides the financial issues, such as division of property and alimony.

Grounds for Getting a Divorce in Georgia

The ground is the appropriate reason that the parties agree upon and can substantiate, or that the filing spouse can prove in court.

Grounds include no-fault, which means the marriage is irretrievably broken, and 12 traditional fault grounds like adultery and domestic abuse.

Residency Requirements for Getting a Divorce in Georgia

A divorce may be granted when one spouse has lived in Georgia for six months or Georgia was the last residence state of the couple when they were living together.

Filing pro se (on your own) or with an attorney can be done easily when a divorce is uncontested. The petitioner completes a Petition for Divorce, which gives the grounds - that the marriage irretrievably broken. 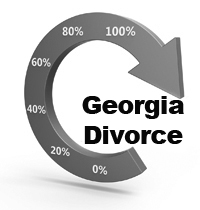 The respondent spouse or his or her attorney can simply accept service, sign, and notarize an acceptance of service of the Petition. The clerk's office provides a form called an Acknowledgement of Service.

Some counties require certain financial disclosures, such as income, assets and liabilities, tax returns, bank statements, credit card statements, personal financial statements as well as other financial documentation that may be relevant or needed to fully disclose current information from one spouse to the other. Here is more information regarding the process of filing uncontested divorce papers in Georgia.

The clerk (or court) may send the divorce papers by certified mail when the other party refuses to accept the papers. It is easier in an uncontested divorce case if the other party (respondent) accepts service of the paperwork, but often times this is not the case.

Sometimes, when a party cannot be located after a diligent search, the court permits the action to move forward by approving service by publication, in which a notice is published in a newspaper. This type of divorce will naturally take longer because of the formality of service by publication.

When the spouses agree on all major issues, they can file for an uncontested divorce, and the court can hand down a divorce as soon as 30 days after the date of filing provided the parties have resolve all the issues such as child custody, child support, alimony and property division. The spouses sign a settlement agreement stating that all issues raised in the Petition are resolved. Learn the best ways to save money when doing your own divorce in Georgia.

A complicated and contested divorce can take years to finalize.

Do It Yourself Online Divorce in Georgia is Easy

Our online software makes filing for divorce in Georgia quick, simple, and affordable. In as little as 20 minutes you can have all your completed divorce forms and filing instructions ready for signing and filing. Instantly access your completed divorce forms after a short online interview. It is that easy, no lengthy completion or delivery times. See if you qualify below:

In Georgia, as in other jurisdictions, divorcing spouses normally sell the marital home and divide the profits, or sell the home to one party and refinance, or the custodial parent occupies the house until the last child leaves school and then the spouses sell it.

In Georgia, vested and non-vested pensions are marital property. That portion of a pension that was earned by one spouse during the years of the marriage can be divided in an equitable manner. Retirement benefits paid from either Defined Contribution Plans (DC), such as a 401(k), or Defined Benefit Plans (DB), which is the company pension. When spouses share in each other's pension plan, a Qualified Domestic Relations Order (QDRO) must be prepared. The QDRO spells out the terms and conditions of the pension distribution.

Rules for Alimony and Spousal Support in Georgia

The Georgia court may award alimony to either spouse. Often times, alimony is granted until the spouse dies or remarries. Alimony can also be paid in one lump sum payment of money or property, or it may be paid over an extended period of time. Courts award either rehabilitative or permanent alimony.

Georgia courts grant alimony on a case-by-case basis and support is awarded as long as a spouse did not desert or commit adultery. That being said, marital fault is considered as a factor when the court awards spousal support. In Georgia, alimony can influence property distribution, and it can become a very intricate part of the outcome of any divorce.

The court considers the circumstances of the spouses, such as the length of the marriage; the participation each party had to the marital estate; the future earning capacity and financial resources of each spouse; their ages and medical condition; the value of each party's separate property; the standard of living sustained during the marriage; and the rehabilitative time one party may need to gain employment.

Agreeing on Child Custody and Visitation in Georgia

In Georgia, "child custody may be awarded to either parent based on the best interest of the child or children and what will best promote their welfare and happiness."

Georgia expresses a preference for both parents to share as equally as practically as possible in the custody of a child. Joint custody gives both parents equal rights and responsibilities; however, Georgia awards either sole custody, by which one parent has the exclusive right to make decisions for the child, e.g., education, health care and religious upbringing; or joint custody by which both parents share these decisions. However, the joint custody routine does not result in an arrangement where both parents share equal time with their child 50-50. In many cases, the child resides with one parent most of the time. A parent with sole custody also has legal custody.

Unless the court waives requirement, Georgia courts may require parents with minor children to complete a mandatory parenting class. The class can often be completed online or in a weekly class set up at the courthouse. Once the course is completed each parent will receive a certificate, which must be provided to the court before the divorce can be finalized.

Sometimes a third party, such as grandparents, may be awarded custody when the court determines that both parents are detrimental to the best interests of the child. If the court determines that the biological parents are detrimental they may be granted supervised visitation. Visitation of this type is introduced at different capacities depending on the unique situation and the age of the child.

Georgia courts calculate child support from the Child Support Worksheet, which reflects the current support guidelines. The support is based on the gross income of both the mother and the father. After combining both parents' incomes, the combined adjusted income can be checked against the Child Support Obligation Table. Each parent's pro rata share of the obligation matches each parent's share of adjusted gross income.

Serving Divorce Papers in Georgia to Start the Divorce Process

Process may be served by the sheriff in the filing county or where the respondent is located, or by a deputy or marshal, or by any citizen not a party to the action appointed by the court and who is 18 years or older.

When a spouse disappears, the spouse who wants to end the marriage must make a good faith effort at locating him or her. After this is done unsuccessfully, the petitioner asks the court for permission to deliver service by publication in a newspaper.