DO IT YOURSELF ONLINE DIVORCE IN FLORIDA

Here are the key elements of a dissolution of marriage in Florida:

Either irretrievably broken down, which argues that the marriage should end, or mental incapacity.

Residency Requirements to File for Divorce in Florida

One of the spouses must live in Florida for six months before filing the petition of dissolution, which can be filed in the county where either spouse lives.

To start a dissolution, as Florida calls a divorce, the petitioner files a notarized Petition for Dissolution of Marriage in the Clerk's Office of the County Circuit Court and pays the appropriate fee. Other case papers follow the petition, which states the other issues of the case, including division of the marital estate, child custody and alimony. The clerk keeps one copy, and the petitioner serves one on the respondent. Learn the best ways to save money when doing your own divorce in Florida. 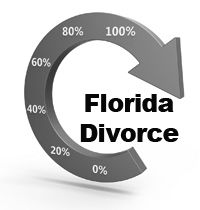 In an uncontested divorce in Florida, the petitioner and sometimes the respondent must attend a court hearing, at which the judge questions the parties and after which enters a Final Judgment Dissolving Marriage. Here is more information regarding the process of filing uncontested divorce papers in Florida.

Absent complicated issues of a contested divorce, a dissolution of marriage in Florida can take as few as 30 days, including the 20 days that are the statutory minimum that must pass after the filing. Cases made complicated by issues can take three months or more.

Service of process by the county sheriff, a professional server or a responsible person over 18 insures that the respondent receives notice and proper delivery of the petition and summons. Generally the papers are delivered to the home of the respondent.

Do It Yourself Online Divorce in Florida

Our online divorce makes it easy to file your own divorce in the state of Florida. In as little as 20 minutes you can have all your completed divorce forms and filing instructions ready for signing and filing. Instantly access your completed divorce forms after a short online interview. It is that easy, no lengthy completion or delivery times. See if you qualify below:

How Property Division Works in Florida

When the parties cannot achieve a "fair and reasonable" division of the marital estate, the court divides it. Florida is dual classification (separate and marital), equitable distribution state. Equitable means fair, not equal or half.

The appreciation of separate property is separate.

In dividing the marital estate, the court considers 10 factors, including the contributions of the spouses, the length of the marriage, interruptions and contribution to the careers of each other, desire of a party to remain in the marital home, dissipation of assets as well as "any other factors necessary to do equity and justice between the parties."

Property is either marital or separate. Marital property is property acquired during the marriage by one or both spouses. Separate property is non-marital, including gifts and inheritances, and is not subject to distribution.

The Circuit Court classifies assets and liabilities as marital or separate.

The equity in the marital home is often among the largest asset a couple accumulates. The couple must determine the market value of the house. Often the house is sold and profits are divided after paying off any debts. The couple can also own the house jointly, or one spouse can buy out the other.

Retirement benefits are marital and subject to distribution. They are either Defined Contribution Plans (DC), such as a 401(k), or Defined Benefit Plans (DB), which is the company pension. That part of a pension accumulated during a marriage is marital property and subject to distribution in one of two regimes: 1) reservation of judgment, where the court orders that each spouse receive a proportionate share when the pension is paid, or 2) a cash out, in which the owner of the plan pays out the other person's share. When spouses share in each other's pension plan, a Qualified Domestic Relations Order (QDRO) must be prepared. The QDRO spells out the terms and conditions of the pension distribution.

Support influences the distribution of property. The Circuit Court can order support on case-by-case basis. Alimony is discretionary, and the court considers all relevant economic factors. Judges enjoy wide discretion in considering a number of factors in deciding to award alimony, including the standard of living, duration of the marriage, financial resources of both spouse, needs and obligations of the spouses, their age, health, physical and emotional conditions, ability to pay, and "any other factor the court deems just and equitable."

The court may also consider any other factor necessary to do equity and justice between the parties. The court may order any spouse who is paying alimony to purchase or maintain a life insurance policy or a bond, or to otherwise secure such alimony award should he or she predecease the other during the obligated support period. Courts may consider marital fault, particularly adultery, when awarding alimony, but the court considers other factors necessary in order to be fair to both spouses.

The court modifies alimony based on a change in circumstances of one party, such as the loss of a job by the payor or the remarriage of the recipient.

Like other jurisdictions, the best interest of the child controls decisions about custody, and the courts decide this considering a number of factors, including the child's age and health, the bond between parents and child, their ability to care for the child and the adaption of the child to his or her community. Courts may consider any factor affecting the health and well being of a child.

Divorcing parents with minor children may be required to complete a parenting class unless the court waives the requirement.

Florida courts prefer that the parents share as equally as possible in the custody of a child in a divorce. Florida, however, does not have joint custody but uses shared custody. In this regime, parents work together to make decisions for the child and neither parent has more leverage. Shared custody versus joint custody are two different types of custody that are both "shared parenting." In shared custody each parent receives roughly equal amounts of time spent with the child, and the parents work together to raise the child in the same manner that they would have if they were still together. In joint custody, which comes in both the forms of legal and physical custody, focuses more on the tasks and responsibilities of each parent as a separate person instead of both parents together as a couple.

Courts enjoy full discretion in determining visitation. This includes supervised visitation when the court has reservations about the child's safety with one parent alone.

Either parent may be ordered to pay child support during or after the dissolution.

Like many states, Florida uses the Income Shares model to determine child support. In this routine, a child receives the same proportion of parental income that he or she would have been receiving if the parents had not divorced because in an intact household, both parents pool their income and spent it for the benefit of all household members, including any children. Income Shares, which is based on a principal in the Uniform Marriage and Divorce Act, considers the gross income of both parents and then establishes the proportion each contributes and divides it among their minor children.

Sometimes, after calculating support, courts permit adjustments up or down that are called deviation factors as described in the Florida state statutes. Courts may consider extraordinary expenses, independent income, seasonal fluctuation in parents' income, special needs as well as "any other reason that should be considered to make child support more equitable." Likewise, extraordinary expenses can be either add-ons, where the expense is added to the support payment paid by the noncustodial parent, or a deduction, where it is subtracted.

Courts may order temporary child support during custody and support actions, and either parent may be order to pay.