DO IT YOURSELF ONLINE DIVORCE IN DELAWARE

Either spouse must have lived in the state of Delaware for at least six months. For a divorce action, a person in the armed forces and stationed in Delaware is considered to be a resident.

How To Get a Divorce in Delaware 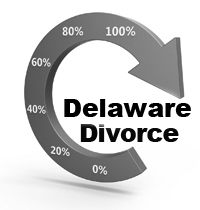 The petitioner completes the Petition for Divorce, which states that at least one spouse has been a resident for six months, gives a legal ground for divorce and identifies any other issues, such as dividing assets and debts, child custody, child support and alimony. Spouses who agree on all of these issues often file pro se for an uncontested divorce. Here is more information regarding the process of filing uncontested divorce papers in Delaware.

The petitioner files the Petition in the clerk's office of the family court in the county of filing, and the clerk will time and date stamp the original with a filing notation. If the couple has minor children the petitioner must also file the Affidavit of Children's Rights (Form 279), and if the spouses have a separation agreement, the petitioner files it as well as the Stipulation to Incorporate the Separation Agreement Form (Form 443).

The petitioner serves the respondent a copy of the filed Petition for Divorce.

The spouses may be required to jointly complete and file one Rule 16c Financial Report (Form 465), but only after they have received the Petition. This form includes information about income, assets, debts, tax returns, bank statements, credit card statements, and personal financial statements.

When the respondent does not answer the served Petition within 20 days of receiving it, or if he or she files an answer agreeing with the divorce, the action is uncontested. If the action is uncontested, the petitioner must choose between the following two routines: the court may decide the divorce based solely on the papers, without either spouse appearing in court, or the court may decide the divorce after a hearing, which the petitioner must attend and the respondent may attend.

With a no-fault divorce, the case is trial-ready when the spouses have been separated for at least six months and the paperwork has been served and the couple has completed the parent education class and filed a certificate of completion. Once the case is trial ready, the parties receive a court notice. In an uncontested divorce, if the petitioner asked to proceed without a hearing, solely on the papers submitted, he or she receives a notice giving him or her 20 days to file a Request to Proceed Without a Hearing (Form 446), and Affidavit in Support of the Request to Proceed Without a Hearing (Form 447).

The court forwards the papers to a commissioner who decides whether to grant or deny the petition for divorce. If the parties seek an uncontested divorce but request a hearing, the spouses receive notice of the hearing date and time. The spouses appear in court on the hearing date, or the court dismisses the Petition and the petitioner must start over. At the hearing, the judge takes testimony and other evidence to determine whether to grant the divorce. If the judge grants the Petition, the parties receive an Order and Decree of Divorce, which terminates the marriage. Learn the best ways to save money when doing your own divorce in Delaware.

Do It Yourself Online Divorce in Delaware

Our online software makes filing for divorce in Delaware simple. In as little as 20 minutes you can have all your completed divorce forms and filing instructions ready for signing and filing. Instantly access your completed divorce forms after a short online interview. It is that easy, no lengthy completion or delivery times. See if you qualify below:

Delaware divorce law requires an equitable distribution of the property. The court generally accepts a fair and reasonable property division the parties agree to, but if the parties cannot agree, the Family Court divides the property.

The Delaware courts divide property and assets in an equitable manner, which does not mean equal, but rather what is fair for both parties. In dividing property, the court considers the length of the marriage, the needs of the parties, the age, health, occupation, and employability of each party, whether the property was acquired by gift, the debts of the parties and the value of allowing the children to remain in the family home. Marital misconduct is not a factor.

After the court classifies assets as marital or non-marital, it divide and distributes the marital property equitably and considers the contribution of each partner to accumulation of marital property; any dissipation of marital property, if any; both the market value and the sentimental value of the property to be divided; the value of each spouse's separate property; any tax or other economic consequences of the property division; the extent to which an award of property may eliminate the need for alimony; and each spouses overall need for financial security.

An equitable division may not necessarily be an equal division.

Alimony and Spousal Support in Delaware

In any Delaware divorce, either spouse may ask for alimony. The spouses may agree upon alimony between themselves. However, if there is a dispute as to alimony, the issue is left to the court's discretion. Generally, the court considers the length of the marriage, the age, health, income, education, and needs of each party. Either spouse may be awarded alimony for up to a period equal to half the length of the marriage; however, there is no time limit for marriages lasting 20 or more years. Marital misconduct is not a factor in considering the award or the amount.

Alimony is discretionary in Delaware, and court considers many factors, including but not limited to the spouses' income and expenses of each spouse; their ages, health and medical condition; their needs and debt obligations, the custodial award; the marital standard of living; tax consequences; marital fault or misconduct; and dissipation of assets.

In determining custody the Delaware court does not consider the gender of the parents. To resolve disputed custody, the court uses the best interests of the child standard and considers the wishes of the child's parents, the child's wishes, the interaction of the child with siblings, grandparents, or other members of the family, the child's adjustment to his or her home, school, and community, the emotional and physical health of the entire family and evidence of domestic violence on the child, other family members, or anyone else.

If the married couple is filing on the ground of irreconcilable differences, they can agree to joint custody and the court will grant it as being in the best interest of the child.

The court determines custody based on the best interests of the child. The court can award sole or joint custody, and if the child is 12 years old or older, the court considers the wishes of the child.

Service of Process for Divorce in Delaware

Anyone not party to the action over 18 years of age may serve process, as can a sheriff of the county in which the defendant resides.

The divorce papers - including two copies of a notice and acknowledgment -- may be served by mailing them by first-class mail, postage prepaid to the person to be served. Service of the summons and complaint may be made in any other manner permitted by law if no acknowledgment of service is received within 20 days after the date of mailing. If the defendant cannot be found after a diligent search, and the defendant, with the approval of the court, may be served by publication, which is made once in each week during three successive weeks in a public newspaper of the county of filing.

When the address is stated, the clerk sends copies of the divorce papers to the defendant, and this is evidence of delivery of the summons.

A summons may be served on a person outside this state by sending the divorce papers to the respondent by certified mail, return receipt requested and restricted delivery. Service by this method is complete as of the date of delivery as evidenced by the return receipt or by the returned envelope marked refused.