Connecticut does not offer a summary or simplified divorce option, but its no-fault and uncontested divorce process may ease the bitterness and frustration of divorce.

Connecticut grounds fro divorce include no-fault, which means incompatibility or living separate and apart for 18 months without cohabitation, and eight traditional fault grounds. The no-fault grounds are most commonly used for uncontested divorces in Connecticut.

A divorce in Connectcut may be granted when 1) one of the parties to the marriage resides in the state for at least a year before the filing or "the next preceding the date of the decree"; or 2) one spouse lived in the state during the marriage and returned with the intention of remaining; or 3) the cause for the dissolution of the marriage arose after either party moved into the state. Service personnel and members of the Merchant Marine who are residents at the time of his or her entry are considered residents.

The action begins when the plaintiff completes the Summons Family Actions (form number JD-FM-3), and the Divorce Complaint/Cross Complaint (form number JD-FM-159). Attached to the Complaint is the Notice of Automatic Orders (JD-FM-158) and the Affidavit Concerning Children (JD-FM-164), if there are children involved. 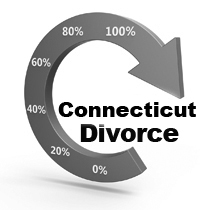 The spouses each complete and exchange Financial Affidavits (JD-FM-6) within 30 days of the Return Date. The form requires the inclusion of all income and expenses and all assets and debts. Here is more information regarding the process of filing uncontested divorce papers in Connecticut.

The dissolution (divorce) takes a minimum of about three to four months; a contested action may take much longer. The court sets two dates when a Complaint is filed. The first is the return date, which is at least four weeks away to give the defendant a chance to answer the Complaint, or file a Cross Complaint, or simply enter a pro se appearance. The second date is the case management date, which is at least 90 days after the return date; it is the earliest date a divorce can be finalized.

The court takes no action before the case management date so that the spouses have some time to settle issues out of court. Couples with children must also complete a court-approved parenting education program within 60 days of the return date. The parties wait at least 90 days after the Return Date for a Judgment of Divorce.

During this waiting period, they work on an agreement about custody of the children and financial issues, and they document any agreement in the Dissolution Agreement (JD-FM-172) form or a Marital Settlement Agreement (MSA).

Do It Yourself Online Divorce in Connecticut

Our online divorce makes it easy to file your own divorce in the state of Connecticut. In as little as 20 minutes you can have all your completed divorce forms and filing instructions ready for signing and filing. Instantly access your completed divorce forms after a short online interview. It is that easy, no lengthy completion or delivery times. See if you qualify below:

Dividing Property Upon Divorce in Connecticut

The court accepts any fair and reasonable property division that the spouses reach by agreement.

Connecticut is an equitable division, all property ("kitchen sink") state. The courts have jurisdiction over all the property that both spouses have, marital and separate.

Although Connecticut courts may look to all assets in the division of property, judges typically award spouses their separate property, unless it would be inequitable or unfair to do so under the circumstances of a particular case. To establish an asset as separate property, it must remain under the control of the spouse claiming it. Property combined with joint property for the benefit of both spouses becomes marital. In Connecticut, the appreciation in the value of separate property is marital property.

Once handed down, a Connecticut property division order cannot be modified unless there are "exceptional and compelling" circumstances for the sake of "fairness and justice."

Connecticut courts grant alimony on a case-by-case basis; alimony is never guaranteed. The court considers the circumstances of the spouses and the length of the marriage. Courts may consider whether either spouse is at fault in determining whether to grant alimony, its amount and duration.

The court may order either spouse to pay alimony. Unlike most jurisdictions, Connecticut courts consider marital fault when deciding alimony.

In Connecticut, court may award three types of alimony: temporary, (alimony pendente lite), awarded during the divorce proceedings and before the final decree; short- term, awarded to allow the recipient time to gain necessary skills; long-term or permanent, granted to a spouse who has significant needs, usually reserved for lengthy marriages where the receiving spouse is at a disadvantage in the job market.

Determination of alimony is not part of the property-division process. The amount and duration of payments depends on factors such as age and health, but also on how he or she contributed to the marriage - including the contribution of a homemaker - and what his or her obligations will be after divorce.

Connecticut considers a number of factors in awarding alimony, including "estate and needs of each of the parties and, in the case of a parent to whom the custody of minor children has been awarded, the desirability of such parent's securing employment."

Any award for alimony must be just and equitable, so the court can't ignore a spouses' ability to pay. In accounting for both spouses' financial conditions, the court can order alimony in lump sum payments or to be made on a schedule.

In Connecticut, the best interest of the child is the primary concern in child custody and that can mean joint or sole custody. Connecticut expresses a preference for both parents to share as equally as practically as possible in the custody of a child. Joint custody gives both parents equal right and responsibilities.

Divorcing parents with minor children may be required to complete a parenting class unless the court waives requirement. Children in Between may be taken online on a home computer.

Connecticut Service of Process for Divorce

Unlike most states, process servers must be licensed, and the license fee is currently one of the most expensive states in the nation to get a process server license. They must be at least 21, and/or have over two-years experience.

In Connecticut divorce cases, personal service is preferred, which means delivery to the defendant personally, or by leaving the divorce papers at his or her house with some person of suitable age and discretion, or by delivering a copy of the Summons and Complaint to an agent authorized by appointment or by law to receive process. The divorce papers are also mailed to his or her residence.

Courts permit Service by Publication when the defendant lives out of the state, or conceals himself or herself, or cannot be found after due diligence. The court issues an order permitting service by publication, which directs the publication in a newspaper, published in Connecticut, for a period of four weeks, and at least once a week during said time. After publication, the defendant has 20 days to appear and answer or otherwise plead. The service is complete after four weeks from the first publication, and in cases when the divorce papers are also mailed, at the expiration of four weeks from such deposit.