DO IT YOURSELF ONLINE DIVORCE IN CALIFORNIA

3 Step Divorce has provided a helpful guide of information for filing for a no contest divorce in California. Learn more about the residency requirements, service of process, child custody and more. Here are the key elements of a dissolution of marriage California:

Either irreconcilable differences, which argue that the marriage should end, or incurable insanity based on competent medical and psychiatric testimony.

One of the spouses must live in California for six months and for three months in the county where the action is filed.

With a lawyer or when filing pro se, the petitioner prepares and begins the action by filing of a summons (Family Law Form FL-115), petition (Family Law Form FL-100) and Declaration Under Uniform Child Custody Jurisdiction and Enforcement Act, if there are children. The petitioner pays a fee and files in the county of residence. Learn the best ways to save money when doing your own divorce in California.

Service of process by the county sheriff, a professional server or a responsible person over 18 insures that the respondent receives notice and proper delivery of the petition and summons. 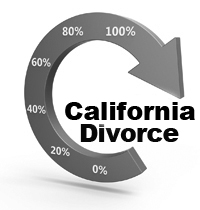 A server, who must be over 18 years and not a party to the case, delivers the divorce papers to the respondent. These divorce papers include 1) the summons-family law, 2) the petition, and 3) a blank response form. The server, who may be a friend, associate, the county sheriff or a professional process server, returns proof of the service to the court.

Service can be personal, which means hand-delivered to the respondent; by mail, substituted, which requires a declaration of diligence, after three or more unsuccessful attempts to serve; by notice and acknowledgement of the recipient, in which the recipient agrees to be served by mail and acknowledges receipt; a service by publication, when a spouse cannot be located and notice is given in a newspaper. Here is more information regarding the process of filing uncontested divorce papers in California.

Contested versus Uncontested Divorce in California

Even when only one partner wants the dissolution, most divorces are uncontested, which means both spouses agree to the terms and conditions of the breakup. Some are contested, which happens when one spouse fights the action, and the parties take the case to court. This happens rarely.

A contested action may require a hearing to establish temporary child custody, support and restraining orders, and discovery, which is a complete disclosure of community and separate property, as well and income and expense declarations. The couples normally negotiate, but when the spouses cannot agree, the case goes to trial. After the trial, one of the lawyers prepares a Marital Settlement Agreement, which defines the divorce, as well as a Judgment for Dissolution, which consolidates all the court orders of the case. A Notice of Entry of Judgment is mailed in six months.

Finalizing the Divorce in California

Six months must transpire from the date of filing until the divorce action is final.

Do It Yourself Online Divorce in California

Absent a "fair and reasonable" division by the spouses, courts divide all community property and debt from the date of the marriage until the marital cut off date equally. Any property acquired during the marriage in any joint form is community property unless it is specifically exempted. Couples can overwrite the equal division of property with a prenuptial agreement. A burden of proof, if necessary (when spouses disagree), is obtained one of the following two ways to classify the property and/or debt: a statement or deed that shows title or a written agreement that the property is to be classified as separate property (often a premarital agreement).

Separate property - property owned by someone before the marriage or acquired by gift or inheritance - is not considered community.

Debts may be divided between the spouses based on whether they were incurred for necessities or nonnecessities in support of a spouse or children.

Debt or expenses that are accumulated after the date of separation are handled as follows: those debts that are defined as normal everyday living expenses to provide necessary support to a spouse and/or children and those that are not. Typically there is a clear difference and the debt can be categorized and managed with an offset in the final property/debt award.

Community property includes all earnings during the marriage and anything acquired with that income.

Often the "primary custodial parent" remains in the marital home and assumes the mortgage, taxes and insurance.

Retirement benefits are community property. They are either Defined Contribution Plans (DC), such as a 401(k), or Defined Benefit Plans (DB), which is the company pension. That part of a pension accumulated during a marriage is community property and subject to distribution in one of two regimes: 1) reservation of judgment, where the court orders that each spouse receive a proportionate share when the pension is paid, or 2) a cash out, in which the owner of the plan pays out the other person's share. When spouses share in each other's pension plan, a Qualified Domestic Relations Order (QDRO) must be prepared. The QDRO spells out the terms and conditions of the pension distribution.

Alimony may be awarded at any time during the action to either spouse in any "just and reasonable" amount based on the standard of living, but the award is not mandatory. Courts consider alimony only after child support is decided. Support can be in the form of a court order.

Court alimony orders are normally paid by wage assignment, which can be stayed by court order.

The court modifies alimony based on a change in circumstances of one party, such as the loss of a job by the payor or the remarriage of the recipient.

Judges exercise wide discretion in considering a number of factors in deciding to award alimony, including the standard of living, duration of the marriage, financial resources of both spouse, needs and obligations of the spouses, their age, health, physical and emotional conditions, ability to pay, and "any other factor the court deems just and equitable."

Like other jurisdictions, the best interest of the child controls decisions about custody, and the courts decide this considering a number of factors, including the child's age and health, the bond between parents and child, their ability to care for the child and the adaption of the child to his or her community.

Courts permit a variety of custody regimes, but consider joint custody and shared legal custody to be the "optimal arrangement." Sometimes a third party, such as grandparents, may be awarded custody when the court determines that both parents are detrimental to the best interests of the child. If the court determines that the biological parents are detrimental (for example, the parents are sex offenders), they may be granted supervised visitation.

Courts exercise wide latitude in determining visitation, which in California is called timeshare. This includes supervised visitation when the court has reservations about the child's safety with one parent alone.

Like many states, California uses the Income Shares model to determine child support. In this routine, a child receives the same proportion of parental income that he or she would have been receiving if the parents had not divorced because in an intact household, both parents pool their income and spent it for the benefit of all household members, including any children. Income Shares, which is based on a principal in the Uniform Marriage and Divorce Act, considers the gross income of both parents and then establishes the proportion each contributes and divides it among their minor children. If the noncustodial parent earns more than the custodial parent, the visiting parent assumes a higher share of the child's support, but it the visiting parent earns less than the custodial parent, he or she pays a smaller share of the support.

Sometimes, after calculating support, courts permit adjustments up or down that are called deviation factors as described in the California state statutes. Likewise, extraordinary expenses can be either add-ons, where the expense is added to the support payment paid by the noncustodial parent, or a deduction, where it is subtracted.