DO IT YOURSELF ONLINE DIVORCE IN ARIZONA

In Arizona, the Superior Court divides all property and debt equally for the divorcing spouses who cannot do it for themselves. All property acquired from the date of marriage until the filing date is subject to division.

Arizona recognizes what is considered a restrictive form of marriage called a Covenant Marriage, by which couples agree to pre-marital counseling and to limit the grounds and options should they decide to divorce.

What the spouses agree upon and can substantiate, or that the petitioner proves in court.

Arizona grounds for divorce (dissolution of marriage) include no-fault, which mean the marriage is irretrievably broken, or if the marriage is a covenant marriage, the grounds include adultery, imprisonment, abandonment, sexual or physical abuse, continuous separation without reconciliation for at least two years or continuous separation without reconciliation for at least one year from the date a decree of legal separation, drug or alcohol abuse, and mutual agreement to a dissolution of marriage.

Residency Rules to File in Arizona

One spouse must live in the state or be a member of the armed services stationed in this state for 90 days before filing for the dissolution. The petitioner files in the Superior Court of the county in which he or she resides.

Arizona gives the petitioner 120 days to serve the divorce papers on the respondent. If they are not served in 120 days, court dismisses the case automatically, and the petitioner must start over. 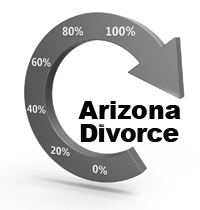 The respondent must respond to the Summons and Petition within 20 days (or, if he or she lives out of state, 30 days) or the court awards the petitioner a default judgment. This means the court gives the petitioner everything requested in the petition, without input from the respondent. After service of process, there is also a 60-day waiting period, which is a "cooling off" period that must pass before the divorce may be finalized. Here is more information regarding the process of filing uncontested divorce papers in Arizona.

Both spouses complete and exchange a notarized Affidavit of Financial Information, which details each party's financial picture, from employment to assets and liabilities and monthly expenses. Supplemental documents, like pay stubs and tax returns, help the court determine the appropriate amount of child support or alimony if the parties cannot otherwise agree. This is filed with the court and served to the respondent as well.

A spouse who receives a Petition doe Dissolution of Marriage should file an appearance to show that he or she wants a voice in the case. He or she can also file a response, which is called an answer, if the Petition contains incorrect statements or he or she want to ask for a result different that what the petition requested. A respondent who wants to contest files a counterclaim to list different reasons for the divorce and pays a filing fee for the counterclaim.

When both parties reach an agreement as to all the issues, they can submit a Consent Decree of Dissolution of Marriage that sets forth the terms and conditions of the divorce. The parties must then request a trial in order to finalize their divorce when they cannot reach an agreement on their own. Learn the best ways to save money when doing your own divorce in Arizona.

Do It Yourself Online Divorce in Arizona

Our online divorce makes it easy to file your own divorce in the state of Arizona. In as little as 20 minutes you can have all your completed divorce forms and filing instructions ready for signing and filing. Instantly access your completed divorce forms after a short online interview. It is that easy, no lengthy completion or delivery times. See if you qualify below:

Property Division Upon Divorce in Arizona

An Arizona court accepts any fair and reasonable property division that the spouses reach.

Marital misconduct is not considered in property division; however, the court does consider economic misconduct, such as gambling, which is called dissipation. Filing and serving the other party with the divorce action severs the financial community; debts incurred after the filing belong to the spouse who incurred them.

Arizona recognizes prenuptial agreements, which set out the terms and conditions of a property settlement when the marriage fails. The courts uphold and divide property as the prenup dictates, even when the division is at variance from the state laws as long as the couple executed the agreement properly.

Although courts may look to all assets in the division of property, judges typically award spouses their separate property, unless it would be inequitable or unfair. To establish an asset as separate property, it must remain under the control of the spouse claiming it. In Arizona, the appreciation in the value of separate property is marital property.

As in other jurisdictions, divorcing couples normally sell the marital home and divide the profits, or sell the home to one party and refinance, or the custodial parent occupies the house until the last child leaves school and then it is sold.

Retirement plans like any other asset, can be either community or separate. The pre-marriage portion will be the separate and sole property of the spouse who earned it, and the portion accrued during the marriage will be split fifty-fifty. A special court order is needed to divide a retirement plan. This order is called a Qualified Domestic Relations Order (QDRO).

Alimony and Spousal Support in Arizona

In requesting alimony, a spouse must prove that he or she lacks assets or property to become self-sufficient and cannot find a job because of a lack of vocational training, skills or has significant child care responsibilities.

Alimony, which can influence property distribution, can become a very intricate part of a divorce. The court does not consider marital misconduct on the part of either party in awarding alimony; adultery, for example, does not influence either the decision to award or withhold alimony, or its amount.

Alimony varies from case to case. In Arizona, courts may typically award rehabilitative or temporary spousal maintenance, intended to provide support until the receiving spouse can become self-sufficient, instead of permanent or continuing support. Support normally ends when either party dies, after a specific amount of time, or at remarriage of the recipient spouse.

In Arizona courts, like all jurisdictions, adhere to the best interest of the child standard. Arizona law expresses a preference for parents to share as equally as possible in the custody of a child in a divorce case. In Joint Custody Parenting Plans, parents must write a parenting plan and submit it to the court for consideration. The plan addresses legal and physical custody.

When parents disagree about custody, the court decides custody of the child.

Sometimes a third party, such as grandparents, receives custody when the court determines that both parents are detrimental to the best interests of the child.

Divorcing parents with minor children may be required to complete a parenting class unless the court waives requirement. Children in Between may be taken online on a home computer.

Courts enjoy wide latitude in determining visitation. The court may order supervised visitation when the court has reservations about the child's safety with one or both parents.

Child support guidelines are based on Income Shares Model, and award is calculated on gross income. Support terminates at age 18, or when the child graduates from high school. The court may not order the parents to pay for the college education costs of the child.

In the Income Shares model, a child receives the same proportion of parental income that he or she would have been received if the parents had not divorced because in an intact household, both parents pool their income and spend it for the benefit of all household members, including any children. Income Share is based on a principal in the Uniform Marriage and Divorce Act. It considers the gross income of both parents and then establishes the proportion each contributes and divides it among their minor children.

The divorce papers, the Summons and the Petition, are served together.

When a respondent waives service, the server files a proof of the waiver. In lieu of accepting service of a Summons, a person can simply appear in open court, or file a responsive pleading. An Appearance or a filing means the Summons was duly served.

If a person does not know where his or her spouse lives, or if the spouse lives outside of Arizona, the petitioner must file a motion for alternate service and then, with court approval, publish a legal notice of the impending action once a week for four weeks notice.