DO IT YOURSELF ONLINE DIVORCE IN ALASKA

Alaska's no-fault and uncontested divorce routines may ease the pain and suffering of divorce. In Alaska couples may use a simplified procedure called dissolution of marriage when both agree that the no-fault grounds for dissolution exist, and agree about the terms and conditions of custody, visitation, and support of any minor children and agree on the division of their property, and the payment of their debts.

Alaska is an equitable distribution state, and an all property state, which means that the courts have jurisdiction over all the property that both spouses have, marital and separate. Equitable means fair, not equal, or even half; fair is what the Superior Court says is fair. The appreciation of separate property is marital.

Alimony may be awarded.

Grounds for Divorce in Alaska

The legal ground is one the parties agree upon and can substantiate, or one the filing spouse proves in the Superior Court. The divorce grounds are: No-Fault, which means incompatibility of temperament which has caused the irremediable breakdown of the marriage; and Fault, which can be based on failure to consummate the marriage; adultery; conviction of a felony; willful desertion for a period of one year; cruel and inhuman treatment; habitual gross drunkenness; incurable mental illness; and drug addiction.

Alaska does not have a strict residency requirement. Alaska only requires that one spouse live in the state for at least 30 days immediately before filing for divorce. The spouse who is filing for the divorce in Alaska must be a resident of the state at the time of filing. A person serving in a military branch of the United States government who has been continuously stationed at a military base or installation in the state for at least 30 days is considered a resident of the state.

Alaska requires different forms for divorcing couples depending on the divorce circumstances: 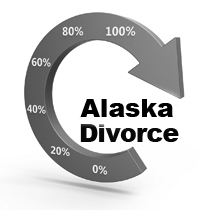 The Summons and Complaint must be served either by using certified mail, return receipt requested or a process server. The petitioner cannot deliver the documents by hand or by regular first class mail. Different rules may apply when a respondent is hard to locate, in the military, or in jail. Virtually all other documents can be served by first class mail or hand delivery.

For the contested divorce procedure, the petitioner files for divorce but can use this routine only when the other spouse can be located and does not agree to the settlement of all issues. Normally, in a divorce there are more documents filed than in an uncontested divorce, and the court hearing is more complicated. All divorces, contested and uncontested, end when the court issues a Decree of Divorce. Here is more information regarding the process of filing uncontested divorce papers in Alaska.

Normally, it takes 30 to 60 days to finalize divorce in Alaska.

There is no specific legal provision for a legal separation in Alaska.

Do It Yourself Online Divorce in Alaska

Property Division When Divorcing in Alaska

The courts accept a fair and reasonable property division the parties reach by written agreement, but if they cannot agree, the Superior Court divides the marital estate.

Alaska is an equitable distribution state, and all property is subject to distribution. Equitable does not mean equal, or even half, but rather what is fair.

In dividing the property, the court first categorizes property as marital or separate assets, assigns a monetary value for each piece of property, and then distributes the property between the spouses.

However, Alaska is one of eight jurisdictions that include separate property in the marital estate "providing the court finds a special showing of need by the non-titled spouse."

In dividing property, the court does not consider marital fault, but courts consider a spouse's wasteful dissipation of marital assets and "must fairly allocate the economic effect of dissolution of marriage" and considers nine factors to making its determination.

Although courts may look to all assets in the division of property, judges typically award spouses their separate property, unless it would be inequitable or unfair. To establish an asset as separate property, it must remain under the control of the spouse claiming it. Property combined with joint property for the benefit of both spouses becomes marital.

The court may include the retirement benefits and plans earned by both spouses as marital assets available for division; however, Alaska places several limitations on the inclusion of retirement benefits as divisible marital assets. Retirement plans are either Defined Contribution Plans (DC), such as a 401(k), or Defined Benefit Plans (DB), which is the company pension. That part of a pension accumulated during a marriage is community property and subject to distribution. When spouses share in each other's pension plan, a Qualified Domestic Relations Order (QDRO) must be prepared. The QDRO spells out the terms and conditions of the pension distribution.

In Alaska, absent an agreement, the appreciation of community property becomes marital property, as do its earnings. Either spouse may request mediation in order to reach a settlement. If neither spouse requests mediation the court may order mediation if the judge believes that it may result in a more satisfactory settlement.

Alimony and Spousal Support in Alaska

The court may award spousal support to either spouse. A spouse seeking alimony must request it in the divorce papers. In determining the need, duration, and amount, the court considers the financial condition of each spouse after the divorce, his or her lifestyle during the marriage, the need in order to pursue a job or career.

In Alaska, like other jurisdictions, courts decide child custody by "the overall best interest of the child."

A parent awarded sole custody must foster a loving environment for the child, with frequent visits with the non-custodial parent and share all details concerning the child's education, health, recreational activities and overall well being.

A married couple in Alaska must decide custody before they can only file for marriage dissolution. When the court decides custody arrangements, the best interests of the child outweigh parental desires.

Alaska courts require divorcing parents with minor children to complete a mandatory parenting class before granting a divorce in Alaska.

In some cases, a third party, or someone other than a child's biological parents -- grandparents, aunts, uncles and partners in same-sex relationships -- gains custody when a third party provides the best option.

In addition to finding a parent unfit because of substance abuse or abuse or neglect towards a child, the courts also consider the conduct of both parents during the course of the marriage, and the impact of parental behavior on the child.

The Alaska courts consider the preference of a child who is old enough to make a distinction between parents when awarding custody.

Extraordinary expenses are either add-ons, where the expense is added to the support payment, or deductions, where the amount is deducted, and indicated as either mandatory or permissive.

Extraordinary medical expenses are a deviation factor. Childcare costs are a mandatory deduction.

The court may order a parent to include a child under a parent's health insurance coverage and contribute to extraordinary medical expenses that are not covered by an insurance carrier.

Support terminates at age 18, or 19 if child is enrolled in high school or the equivalent and is residing with custodial parent. Court may not require either parent to pay for post-majority college tuition.

Service of Process for Alaska Divorce

In personal service, the server delivers the summons and complaint to the recipient personally, or by leaving the documents at the individual's dwelling with someone of age and discretion living there, or by delivers a copy of the papers to an agent authorized by appointment or by law to receive them.

Process may also be served by registered or certified mail, return receipt requested. Copies of the process must be mailed for restricted delivery to the recipient or a designated agent. Receipts are returned to the party serving process or the party's attorney. Service is complete when the return receipt is signed. The server gives proof of service to the plaintiff or his or her attorney promptly and within the time limit to respond to process.

Service may be made by publication. The plaintiff must make a good faith search, including an Internet search and inquiries with people who may know the missing spouse's whereabouts. With the approval of the court, a notice is published four times during four consecutive weeks, once in each week, in a newspaper published in the district where the action is pending, or if none are published there, then in a newspaper published in Alaska circulating in the district. Prior to the last publication, the plaintiff must send the missing spouse the divorce papers by registered or certified mail, with return receipt requested, with postage prepaid, and by regular first class mail. The notice is addressed to where the party usually receives mail, unless this is unknown or cannot be ascertained.