DO IT YOURSELF ONLINE DIVORCE IN ALABAMA

Alabama is an equitable distribution state, and the courts can distribute all property if need be. This means that the courts have jurisdiction over all the property that both spouses have, marital and separate. Equitable means fair, not equal, or even half; fair is what the Superior Court says is fair. The appreciation of separate property remains separate property and alimony may be awarded. If you and your spouse can agree on the property distribution as well as any issues regarding children, then you have what is called an uncontested divorce. This is the most simple type of divorce and often times spouses choose to file for divorce on their own under this circumstance.

Alabama offers no-fault divorces based on incompatibility, irretrievable breakdown of the marriage, and voluntary abandonment, and fault divorces based on physical incapability, adultery, imprisonment, drunkenness and addiction, insanity, wife's pregnancy by another man, domestic violence, and living separate and apart from the bed and board of the husband for two years.

The Divorce Filing Process in Alabama

In order to file for a divorce in Alabama, the plaintiff must complete the Complaint for Divorce, which provides basic identification information as well as the grounds for divorce, such as irrevocable relationship breakdown (this is the most common for uncontested divorces in Alabama). In a marriage with children, additional forms related to child support must be completed, and the parents must attend a seminar called Children Cope with Divorce. 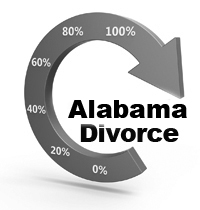 The plaintiff files the divorce paperwork in the clerk's office or the Circuit Court in the county of filing. The clerk keeps a copy of the signed Complaint and returns a copy with a date stamp and notation showing filing in the court.

After filing, the plaintiff serves the defendant a copy of the Complaint. If the defendant or his or her attorney agrees to accept delivery of the Complaint, he or she can return an Acceptance of Service. The acceptance is in writing, and signed by the spouse and a witness. Acceptance of Service is easiest way to serve process. Here is more information regarding the process of filing uncontested divorce papers in Alabama.

Some counties require certain financial disclosures including income, assets and liabilities, tax returns, bank statements, credit card statements, personal financial statements, and any other documentation that the defendant or the court should know. Uncontested means not only that both parties agree to a divorce, but that both parties already agree on the division of property, child support, and child visitation. Their signed Settlement Agreement memorializes these agreements.

Alabama requires a 30-day waiting period before any divorce is finalized. The wait is designed to keep couples from rushing into a divorce, and it gives the couple a chance to potentially reconcile. Learn the best ways to save money when doing your own divorce in Alabama.

Do It Yourself Online Divorce in Alabama

Our online divorce makes it easy to file your own divorce in the state of Alabama. In as little as 20 minutes you can have all your completed divorce forms and filing instructions ready for signing and filing. Instantly access your completed divorce forms after a short online interview. It is that easy, no lengthy completion or delivery times. See if you qualify below:

Marital fault may be considered in the division of the marital estate.

The court accepts any fair and reasonable property division that the spouses reach.

Alabama is an equitable division, and can be all property ("kitchen sink") state. Alabama is one of eight jurisdictions that include separate property in the marital estate "providing the court finds a special showing of need by the non-titled spouse." Thus, the courts have jurisdiction over all the property that both spouses have, marital and separate.

Alabama recognizes prenuptial agreements, which set out the terms and conditions of a property settlement when the marriage fails. The courts uphold and divide property as the prenup dictates, even when the division is at variance from the state laws as long as the couple executed the agreement properly.

In dividing property, the court classifies assets and liabilities as marital or separate, then places a value on assets and debts, and then makes an assignment. In dividing property, the court considers the duration of the marriage; the conduct of the spouses in the marriage; their age, health, station, occupation, amount and sources of income, vocational skills, employability; estate, liabilities and needs of each of the parties, and "the opportunity of each for future acquisition of capital assets and income."

The court may include the retirement benefits and plans earned by both spouses as marital assets available for division; however, Alabama places several limitations on the inclusion of retirement benefits as divisible marital assets. Retirement plans are either Defined Contribution Plans (DC), such as a 401(k), or Defined Benefit Plans (DB), which is the company pension. That part of a pension accumulated during a marriage is community property and subject to distribution. When spouses share in each other's pension plan, a Qualified Domestic Relations Order (QDRO) must be prepared. The QDRO spells out the terms and conditions of the pension distribution.

Once handed down, an Alabama property division order cannot be modified unless there are "exceptional and compelling" circumstances for the sake of "fairness and justice."

In Alabama, the court may award or decline alimony based on a consideration of the income disparity between the spouses and the standard of living enjoyed by the couple during the marriage. In deciding alimony, the court considers the length of the marriage; each party's respective earning ability and future earning prospects; the ages and health of the parties the value and type of property; the conduct of the parties; and "any other factors the court determines relevant."

Alimony can be awarded to either spouse even when neither requests it. It is rarely awarded in marriages of less than twelve years and is generally reserved for situations where one spouse has been economically dependent upon the other during a long-term marriage.

Courts award alimony based on the showing of need by one spouse and the ability to pay by the other spouse. Unlike child support, no statutory formula exists to calculate the amount alimony.

Misconduct by either spouse may be considered in the decision to award alimony and may prohibit any maintenance, but property acquired before the marriage or by inheritance or gift may not be considered for alimony.

In Alabama, joint custody has two forms: joint legal custody and joint physical custody. Joint legal custody means both parents share equal rights about major decisions, such as health care, and education. Both parents maintain equal rights and responsibilities, but the court may appoint one parent to have a sole capacity to make certain decisions for the best interest of the child. Joint physical custody means that each parent has scheduled contact with the child but not necessarily for equal amounts of time.

Child support is determined under the Alabama Child Support Guidelines, unless the Court finds grounds to deviate from the guidelines. In Alabama, the Department of Human Resources enforces child support obligations. The court retains jurisdiction to modify child support, up or down, until the children reach the age of 19.

A Process Server, who is a sheriff or constable, or a designated person over 18, who is not a party to the action usually serves process - the divorce papers.

The server delivers the divorce papers to the party authorized to receive them or leaves the papers at the recipient's home or with a competent person living there.

In personal service, the server locates the recipient and delivers process directly to him or her. When process is delivered, the server endorses that fact on the process and returns it to the clerk, who makes the appropriate entry on the docket sheet. The return of process means process has been served.

The server must serve process within 30 days. In the event of failure of service, the clerk notifies, by mail, the attorney of record or if there is no attorney of record, the party at whose instance process was issued. The clerk enters the fact of notification on the docket.

If the recipient refuses to accept process, the clerk can mail the papers to him or her at the address to where they are to be served. Service is then considered complete.

When the recipient cannot be located and with the approval of the court, the clerk directs that a notice by publication be made in a newspaper of general circulation in the county in which the complaint is filed.