RESIDENCY REQUIREMENTS FOR FILING A DIVORCE

Very often people wanting to divorce are uncertain about residency requirements for filing. Can you file for a quickie divorce in another state? Some people believe they can just file for divorce in the state of their choosing. Some, for example, may want a jurisdiction where courts divide property and debts by equitable distribution rather than by a community property routine. Many people also incorrectly believe they have to divorce in the state where they were married.

Residency requirements exist to protect the divorcing parties by preventing the filing spouse from choosing a jurisdiction with the laws that he or she likes best.

Proper establishment of residency is important. Failure to do so can become grounds for contesting the divorce or the case being quickly dismissed or rejected at the time of filing. Courts cannot issue a divorce without proper jurisdiction.

Nearly all states require that a person wishing to end a marriage there be a resident of the jurisdiction before filing for divorce. The length of time varies. In 26 states, residency is established in six months or 180 days. Other states require 60 to 90 days. In Nevada, it is six weeks. Three states -- Alaska, South Dakota and Washington -- have no residency requirement. Most states also require that the party be a resident in the county of filing for a shorter a period of time than the state requirement. The residency must generally be continuous; that means if the filing spouse's state has a three-month requirement, the filing spouse cannot live there for two months, leave for a month, return for a month, then file for divorce. After the filing, however, jurisdiction requirements are established, so the filing spouse may leave. 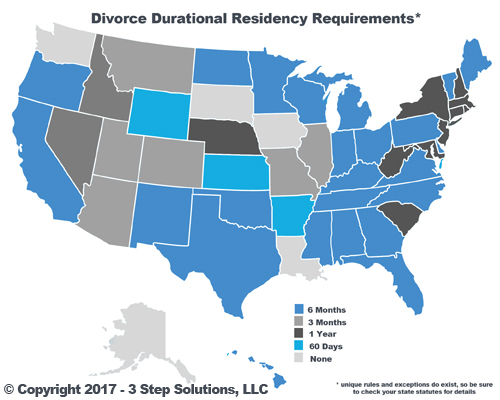 In their divorce laws, some states use the word domicile in their statutes instead of residency. There's a distinction. Couples may own property in different states, but not live in all of them. A vacation home or a rental property are residences but not the couple's domicile. Their domicile is the place where they receive mail, pay taxes, vote and are licensed to drive -- where they actually live.

Before any state can grant a divorce, it must have jurisdiction over the spouses, which gives it the right to decide issues between them. In a divorce, the Petition or Complaint attests to the fact that the filing spouse meets the residency requirements, which gives the state jurisdiction. Serving the spouse with the divorce papers means the state also gains jurisdiction over him or her. After divorce jurisdiction is established, a filing spouse can usually leave the state, either temporarily or permanently. However, exceptions exist if there are children.

In determining domicile, courts consider where a person's family lives, where he or she votes, auto registration and drivers' license, participates in community activities, and place of employment.

Domicile or residency requirements can vary considerably from state to state. For example, if someone moves to Nevada with the intention of filing for divorce there, he or she needs only wait six weeks. In Connecticut, a person must establish a domicile for a full year, and New York he or she must live continuously for two years if the marriage was not performed there. These are extremes; however, in many states, the divorce residency requirements is six months.

Domicile is a more demanding standard than residency, but even if a person can't establish domicile, he or she probably should be able to file for divorce after meeting the state's residency requirements. Domicile is more relevant for issues like state income tax, probate matters, and estate taxes.

In a divorce if a party establishes residency, it usually doesn't matter if both spouses live there, or only the filing spouse does because the court has the power to make decisions that involve the other spouse as well. Of course, a person is free to move to another state (or county) to divorce there as long as he or she can prove residency in the state or county.

WHAT ARE THE RESIDENCY REQUIREMENTS IN YOUR STATE?