Wisconsin is one of 17 states and the District of Columbia that permit only no-fault divorce.

Here are the key elements of a Wisconsin divorce:

The petitioner makes three copies of all the divorce paperwork - the Summons, Petition and Confidential Addendum. He or she pays a filing fee and keeps one copy, gives one copy to the respondent, and files one with the clerk who assigns the paperwork a case number. 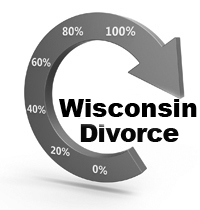 If the marriage has no children, the petitioner completes a Summons, Petition and Confidential Addendum for an action without children. If the marriage has children, the petitioner completes the forms for marriages with children. In both cases, the parties prepare a Financial Disclosure Statement, which details each spouse's financial position. Here is more information regarding the process of filing uncontested divorce papers in Wisconsin.

A Wisconsin uncontested divorce moves more rapidly and cost less than contested actions which require greater expense and court time. Learn the best ways to save money when doing your own divorce in Wisconsin.

Do It Yourself Divorce in Wisconsin

Wisconsin is a community property state. The courts accept any fair and reasonable division the spouses reach, and the state uses a dual classification to divide property as community and separate.

Except for an inheritance, gift or property owned before the marriage, all property acquired during the marriage is community. The appreciation of separate property is separate.

In dividing property, the court generally does not consider marital misconduct, but economic misconduct - such as gambling away marital assets, for example - may result in off setting compensation to the victim spouse.

When couples cannot agree on a fair and equitable solution, courts consider "all relevant factors, including "the contribution of each party to the marriage, giving appropriate economic value to each party's contribution and child care services"; "the nature and extent of separate property"; "whether one of the parties has substantial assets not subject to division by the court "; and "such other factor as the court may in each individual case determine to be relevant."

Retirement benefits are marital property and when the worker meets all the requirements for payout, they are called vested. The plans are either Defined Contribution Plans (DC), such as a 401(k), or Defined Benefit Plans (DB), which is the company pension. That part of a pension accumulated during a marriage is community property and subject to distribution. When spouses share in each other's pension plan, a Qualified Domestic Relations Order (QDRO) must be prepared. The QDRO spells out the terms and conditions of the pension distribution.

The court grants alimony to either spouse for a duration and in an amount that it considers fair based on all relevant factors, including the length of the marriage and the financial situation of the parties. The court can consider any factors it deems relevant in awarding alimony, but duration of the marriage is an important factor.

Marital fault is not a consideration. Generally the spouse who has forgone an education or career to support children is eligible, and courts generally order temporary, short- or long-term depending on the needs of the recipient.

In considering alimony, the courts consider rehabilitation, standard of living while married, length of the marriage, the age and health of the parties and the "feasibility that the party seeking maintenance can become self-supporting at a standard of living reasonable comparable to that enjoyed during the marriage, and the length of time necessary to achieve that goal" in addition to a number of other factors.

In Wisconsin, the best interest of the child is the primary concern in child custody and that can mean joint or sole custody. In deciding this, the court considers each parent's wishes; the child's relationship with his or her parents; the child's adjustment to his or her home and school, and the mental and physical health of both parents.

Courts permit a variety of custody regimes, but evaluate 12 in deciding custody and consider whether joint custody is workable. One or both parents may be given either legal or physical custody, but when both parents can work together, the Wisconsin divorce court normally awards both parents shared custody.

Wisconsin strives for both parents to share custody of a child. Joint custody gives both parents equal right and responsibilities.

Courts modify custody routines only when the party seeking modification can prove that it is in the best interest of the child.

Courts consider 14 factors in deciding child support, but rely on the percent of parental income to fix the amount. In the percent of income model, the noncustodial parent of one child pays 17 percent of his or her gross pay to the custodial parent, up to 34 percent for five or more children. The official child support guidelines are used unless the parents agree to a different amount approved by the court, or the courts determine the guidelines produce an unjust result.

The courts may order a slacker to find employment and base his or her support payments on imputed income. Courts sometimes send deadbeat parents to jail.

In a Wisconsin divorce, a process server does not have to be licensed and can be anyone not a party to the action but authorized by the county court.

A party is considered personally served when he or she receives the Summons personally. Leaving a copy of the divorce papers at the defendant's home with a mature person may also effect service.

In a divorce, the server delivers the Summons and Petition to the defendant, and completes an Affidavit of Service that identified the recipient, time, address and manner of service.