DO IT YOURSELF ONLINE DIVORCE IN TENNESSEE

The following are the grounds for divorce in Tennessee: no-fault, which is irreconcilable differences between the spouses or a two-year period of separation, without cohabitation, when no minor children are involved, and fault that includes impotence, bigamy, adultery, willful desertion for one year, conviction of an infamous crime, or a sentence to confinement in a penitentiary for a felony, cruel or inhuman treatment that makes cohabitation unsafe, attempting to take the life of the other, refusal to move to this state, and being willfully absent from the spouse residing in Tennessee for two years, the wife was pregnant at the time of the marriage, by another person, without the knowledge of the husband, habitual drunkenness or drug abuse, indignities that render the spouse's position intolerable, and force the spouse to withdraw, and abandonment and refusal to provide for the spouse while having the ability to do so.

The plaintiff must be a resident of Tennessee. If the grounds for divorce happened outside Tennessee, either spouse must have resided in the state for six months before filing for divorce in Tennessee. Military personnel must reside in the state for at least one year before filing. The Complaint for Divorce must be filed in the chancery or circuit court in the county where the parties reside at the time of their separation, or in either the county where the defendant resides, or where the plaintiff resides.

The petitioner files divorce papers in the appropriate county court, and asks the clerk, who assigns a case number to the action, for a Divorce Certificate, which carries a specific deadline. 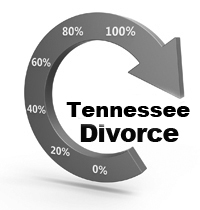 At least 60 days after filing a Complaint for Divorce, the plaintiff schedules the Final Divorce Hearing, where the plaintiff answers the judge's questions about the marriage, separation, and other items on the paperwork and normally orders the divorce. After the Final Divorce Order is issued, each spouse has 30 days to appeal the order, which means that both must wait 30 days to get married or buy property.

The plaintiff normally serves the divorce papers on the defendant.

The court may require that the parties submit a personal financial affidavit detailing their current income and expenses and interests in real property and personal property, which means income from all sources.

A divorce for irreconcilable differences requires a Marital Dissolution Agreement and a Permanent Parenting Plan, if there are minor children, and attending a hearing. A contested divorce takes longer because the other spouse files an Answer, and then both sides then do discovery, which means depositions, interrogatories, and fact finding, in preparation for a trial and eventually a final decree.

In general, a mutual-consent, no-fault divorce typically takes from two to six months. If the parties agree to a settlement quickly, then the divorce can be granted as soon as the required minimum time expires. Contested divorces generally take from six months to two years to complete because of motions, discovery, and trial. A divorce for irreconcilable differences costs less and moves more quickly through the court and often yields less court filing fees.

The minimum statutory waiting period for a divorce based on irreconcilable differences is 60 days after filing if there are no unmarried minor children and 90 days after filing if the couple have unmarried, minor children. There is no statutory minimum-waiting period when fault grounds are used. Learn the best ways to save money when doing your own divorce in Tennessee.

Do It Yourself Online Divorce in Tennessee

Our online software makes filing for divorce in Tennessee easy. In as little as 20 minutes you can have all your completed divorce forms and filing instructions ready for signing and filing. Instantly access your completed divorce forms after a short online interview. It is that easy, no lengthy completion or delivery times. See if you qualify below:

Tennessee courts strongly encourage parties to agree on property distribution outside of court; otherwise, the court divides the property for them using a dual classification model.

The court classifies assets as marital or non-marital and divides and distributes the marital property equitably.

The court shall consider the following factors when determining an equitable distribution of the marital property: the length of the marriage, the age, physical and mental health, employability, and financial needs of each spouse, the contribution of one spouse to the education or increased earning power of the other spouse; the relative ability of each spouse for future employment and asset acquirement; contributions as a homemaker, wage earner, or parent, the value of the separate property of each spouse, the economic circumstances of each spouse at the time of the divorce, the tax consequences of the proposed property settlement, the social security benefits available to each spouse, and any other factors relevant to an equitable distribution settlement.

As in other jurisdictions, the court may award the family home and effects, or the right to live there for a reasonable period of time, to either party, but shall give special consideration to the spouse having physical custody of a child or children of the marriage.

Alimony and Spousal Support in Tennessee

The spouses may agree on an alimony amount and/or each can waive the right to alimony at their discretion by written agreement within the divorce papers.

The court may award alimony from one spouse to the other, or out of either spouse's property award, according to the nature of the case and the circumstances of the parties.

The court may also award rehabilitative alimony, periodic alimony, transitional alimony, or lump sum alimony, or a combination of these.

In awarding alimony, the court considers: the earning capacity, obligations, needs, and financial resources of each spouse, the earning capability of each party, and the necessity of a party to secure further education and training to improve such party's earnings capacity to a reasonable level, the duration of the marriage, the age, mental, and physical condition of each party, including, but not limited to, physical disability or incapacity due to a chronic debilitating disease, whether the custodial parent is unable to work outside the home due to the care of a minor child, the separate assets of each party, the property apportioned to the party, the standard of living established during the marriage, the contributions as a homemaker and to the education, training or increased earning power of the other party, the relative fault of the parties, and any other factors, including the tax consequences to each party, as are necessary to consider the equities between the parties.

In making the award, the court considers: the emotional ties, love, and affection between the parents and the child, the ability of the parents to provide adequately for the child, the quality of the child's adjustment to the present environment, including the home, school, and community, provided there is no evidence of child abuse, the stability of the family unit, as well as the mental and physical health of the parents, the preference of the child if 12 years of age or older, evidence of abuse to the child, the other parent, or any other person, the character of any other person who resides with or frequently interacts with the child, and the parenting abilities of each parent, including their willingness to encourage a close and continuing relationship between the child and the other parent.

Courts require all divorcing parents with minor children to complete a mandatory parenting class before granting a divorce.

Child support in Tennessee is based on the Income Shares Model, and the provisions are outlined in the Tennessee child support guidelines. The court may require health insurance coverage for each child of the marriage, with either party to pay all, or each party to pay a pro rata share of, the health care costs not paid by insurance proceeds.

In the Income Shares model, a child receives the same proportion of parental income that he or she would have been received if the parents had not divorced because in an intact household, both parents pool their income and spend it for the benefit of all household members, including any children. Income Share considers the gross income of both parents and then establishes the proportion each contributes and divides it among their minor children.

Extraordinary expenses are either add-ons, where the expense is added to the support payment, or deductions, where the amount is deducted, and indicated as either mandatory or permissive. Deviations from support guidelines may be appropriate for reasons where the court finds it in the best interest of the child.

Service of Process for a Tennessee Divorce

The petitioner normally serves the divorce papers (the summons and the complaint) on the respondent using the county sheriff's department, or a private process server, or sending by mail if respondent signs an acknowledgement of service of process.