DO IT YOURSELF DIVORCE IN SOUTH CAROLINA

Filing a divorce yourself in South Carolina is very common, especially when your divorce is uncontested. An uncontested divorce is one in which you and your spouse both agree on all the issues related to dissolving your marriage. You come to an agreement on your own, so all you need to do is complete and file the proper paperwork with the court to have your South Carolina divorce finalized.

South Carolina recognizes no-fault and fault divorces. Under no-fault, both parties must live apart for at least one year; fault divorce requires proof that the marriage is irretrievably broken due to adultery, desertion (for a period of one year), physical cruelty, or substance abuse. The no-fault ground is the most popular ground for people who file their own divorce.

Either the plaintiff or the defendant must have been a resident of South Carolina for at least one year; however, when both spouses are residents, only the plaintiff must have resided in the state for three months.

To begin the action, the plaintiff completes a Summons and a Complaint for Divorce as well as a Family Court Cover Sheet and a Financial Declaration Form, and then files the divorce papers with the Clerk of Court, Family Court Division in the appropriate county. 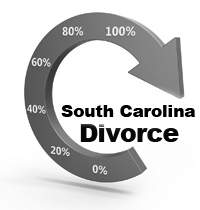 The plaintiff serves the divorce papers on the defendant in one of four ways: U.S. Mail, personal service, service by the Sheriff's Office, or a private Process Server.

When a defendants financial condition is relevant or is an issue to be considered by the Court, which happens in a majority of divorce cases, he or she files a Financial Declaration.

When the defendant has not filed an Answer, a formal response to the Complaint, or an Answer that agrees with all the stipulations in the complaint 35 days after the service of process, the plaintiff proceeds with the final divorce by default. This means that the plaintiff proceeds without opposition and completes a Request for Hearing and an Affidavit of Default for Divorce and files a copy of a return receipt or other affidavit showing proper service was performed.

The Clerk of Court mails the plaintiff a Notice of Hearing, which sets a court date, and the plaintiff mails a copy to the defendant, by certified mail, return receipt requested. Once the signed green card is returned, the plaintiff completes an Affidavit of Service by Mailing in front of a Notary Public. If the envelope and card are returned unsigned, the plaintiff should bring the returned envelope to the divorce hearing. Here is more information regarding the process of filing uncontested divorce papers in South Carolina.

At the hearing the judge asks questions about the paperwork, the marriage, and the separation. The judge signs the Final Order of Divorce. A divorce is not final until the order is signed and filed with the Clerk of Court. An uncontested case takes about three months. Learn the best ways to save money when doing your own divorce in South Carolina.

Do It Yourself Online Divorce in South Carolina

In addition, the courts may consider marital fault or misconduct. Financial misbehavior - for example, habitual gambling - may be a factor in the division of property.

After the court classifies assets as marital or non-marital, it divides and distributes the marital property equitably. As in other jurisdictions, divorcing couples normally sell the marital home and divide the profits, or sell the home to one party and refinance, or the custodial parent occupies the house until the last child leaves school and then sell it.

Spousal support is awarded on a case-by-case basis, and either party may seek spousal support. Either the spouses or the courts decide the amount and duration of support (if any).

Unlike many other states, South Carolina also permits courts to consider marital misconduct as a factor in alimony, and the court does not award alimony to any spouse who commits adultery before the court issues a written property settlement or permanent order of separate maintenance. In South Carolina alimony influences the distribution of property, and it can become intricately involved in a divorce settlement.

In South Carolina, the primary consideration in awarding custody is the best interests of the child, not who ought to be the custodian.

The court considers the child's preference to be important. The court may consider the choice a child makes if the judge feels the child is mature enough to make such a decision and the logic behind the choice is reasonable.

The courts are prohibited from choosing a custodian based solely on the parent's financial status or gender; however, South Carolina courts consider religious issues when deciding a child's best interest -- one of only a few states to do so. In addition to the religious faith of the parents and child, the South Carolina courts consider the wishes or preferences of the child as to custody, provided that he or she is mature enough to make such preferences, which is normally 12 or older; any history of domestic violence, child abuse, negligence, or substance abuse; and any other factors that directly affect the child's welfare such as the nature of the parents' divorce.

South Carolina has abolished the Tender Years Doctrine, the principle that only a mother can adequately care for an infant or very young child. However, if parents have never been married, South Carolina considers the mother to have sole custody unless, and until, the father petitions the court to change that status quo.

At the courts discretion, the judge may require divorcing parents with minor children to complete a parenting class before granting a divorce. Many parents comply by taking the Children In Between online.

South Carolina uses the Income Shares model to determine child support. In this routine, a child receives the same proportion of parental income that he or she would have been received if the parents had not divorced because in an intact household, both parents pool their income and spend it for the benefit of all household members, including any children. Income shares considers the gross income of both parents and then establishes the proportion each contributes and divides it among their minor children.

Sometimes, courts consider extraordinary expenses, independent income, seasonal fluctuation in parents' income, special needs as well "any other reason that should be considered to make child support more equitable." Extraordinary expenses are either add-ons, where the expense is added to the support payment, or deductions, where the amount is deducted, and indicated as either mandatory or permissive.

The defendant may be served in one of four ways: U.S. Mail, personal service, service by the sheriff's office, or a private process server.